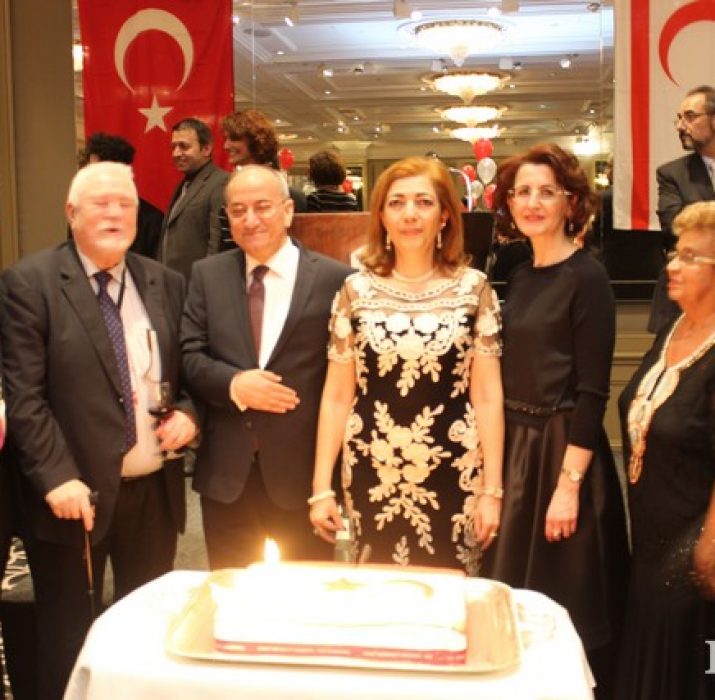 The 34th anniversary of the founding of the Turkish Republic of Northern Cyprus took place at a reception held at the Hyatt Regency Churchill Hotel in central London.

Mrs. Zehra Başaran, Representative of the Turkish Republic of Northern Cyprus, welcomed her guests at the door and got a souvenir photo. Speaking to guests at the reception later, Başaran said:

“Welcome to celebrate the 34th anniversary of the Turkish Republic of Northern Cyprus, you have honored us. We celebrate this year with great pride, excitement and joy, just like every year our foundation is founded. It is a special pride and happiness to be here for me and to celebrate our Republic Day with you.
The Turkish Cypriot people declared their state on November 15, 1983 as a result of the struggle for freedom and existence for many years. The Turkish Cypriot people have passed through very difficult stages today as the beginning of the sovereign, independent, free and democratic experience. Our Republic, our community leaders, Dr. Fazıl Küçük and Founding President Mr. Rauf Denktaş and his colleagues are a product of resistance against the destruction of our people in impossibilities and pushing towards minority status.

The dark years that began in 1963, is a time when the Turkish Cypriot community is facing humanitarian, material and spiritual losses, diminished hopes, struggle for survival and migration to oppression and threats. In 1974, the Turkish Cypriot community provided peace and tranquility to the island of Cyprus and its people through the intervention of its mother country, the guarantor, and then the Turkish Cypriot people established their own sovereign state within their borders.
The United Nations Peacekeeping Force came to the island in 1964 and negotiations started in 1968 to find a just and lasting solution to the Cyprus problem. For almost 50 years since 1968, the Turkish Cypriot side has always been on the brink of good faith and patience for the solution opportunities that have come to the fore. Finally, in the intensive negotiation process that began in May 2016, Turkey pursued a permanent, peaceful and just solution to the settlement of Turkey’s effective and actual guarantee in a federative Cyprus based on bi-zonal, two-sided and political equality. Our negotiating efforts on July 2017 ended without a result. Today, my belief is that the Turkish people of North Cyprus will continue to rise as they are now, and will continue to rise, progressing, developing, and overcoming all obstacles and constraints.
As we celebrate the 34th anniversary of our Republic with honour and pride, the Turkish Cypriot people are moving towards the future with the support always provided by the motherland Turkey, despite the obstacles and constraints imposed on the Turkish Cypriots by the international public. The essential task for us is to take this legacy, knowing that the Turkish Cypriot people today is the sovereign state that they have, the land they freely live and the struggle for life and the prices paid, with their harshness’s, difficulties and sacrifices. Cooperation and work towards the development of the KKTC in every field, especially in the economic field, will be assured that we will come together with the Turkish Cypriots and those standing beside the KKTC thanks to the strong ties and unity of our people in the UK.

With this meaningful day, the community leaders who undertook major duties in reaching the Turkish Cypriot people in bright days. Fazil Küçük and Founder President Rauf Denktas and their struggling friends and martyrs who have died in this favor, our gratitude and gratitude to the survivors; and to the Republic of Turkey and its people who always have the support and security that our people provide in every field in the efforts of independence, freedom, democracy and human life. I would like to congratulate everyone on the Republic Day once again, with my respect and love.”