Not brushing your teeth increases risk of mouth and stomach cancer 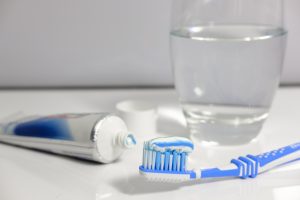 BRUSHING your teeth regularly could cut your risk of developing cancer of the mouth or stomach, according to a study.

Scientists at Harvard T.H. Chan School of Public Health tracked thousands of people for more than 20 years to uncover the link.

They found people with a history of gum disease were up to 52 per cent more likely to develop oesophageal or gastric cancer later in life.

The risk was even higher among people who had previously lost teeth, results also showed.

According to the NHS, the leading cause of gum disease is poor oral hygiene — or not brushing your teeth ‘properly or regularly’.

Researchers looked at oesophageal and gastric cancer rates in 98,459 women and 49,685 men over at least two decades.

The results showed that during 22 to 28 years of follow-up, there were 199 cases of oesophageal cancer and 238 cases of gastric cancer.

History of gum disease was associated with a 43 per cent and 52 per cent increased risk of oesophageal cancer and gastric cancer, respectively.