‘Significant progress’ in Theresa May’s talks with the DUP

Talks between Theresa May and the Democratic Unionist Party over a confidence and supply deal to prop up the Conservative Government have been “constructive”, Downing Street has said. 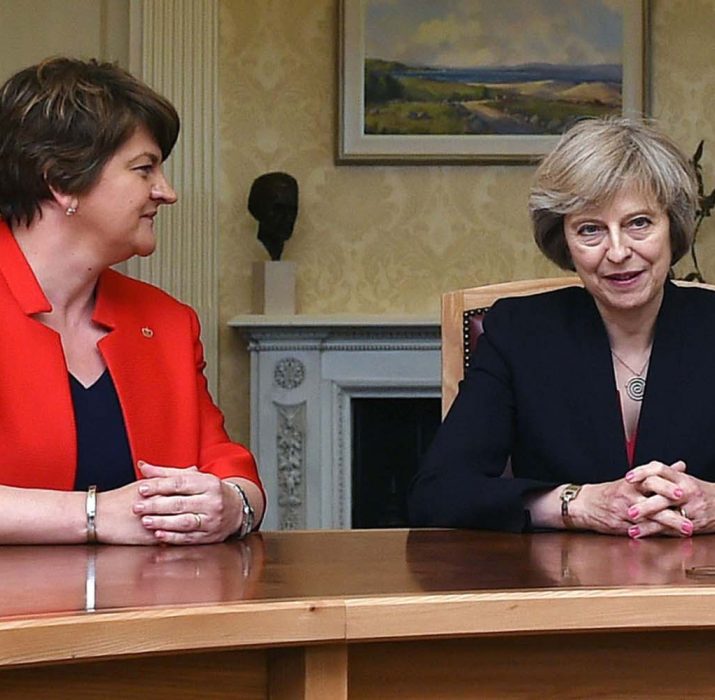 Talks between Theresa May and the Democratic Unionist Party over a confidence and supply deal to prop up the Conservative Government have been “constructive”, Downing Street has said.

According to Sky sources, “significant progress” has been made in discussions so far and both sides anticipate an agreement will be made by Thursday at the latest.

Sky’s Ireland Correspondent David Blevins reports that DUP leader Arlene Foster is not returning to Belfast on Tuesday as planned, which could suggest a deal is not far away.

One source close to the DUP talks said an agreement “should be wrapped up within 24 hours”.

Following two hours of talks at Number 10, Ms Foster said: “Discussions are going well with the Government and we hope soon to be able to bring this work to a successful conclusion.”

She added that “Brexit, counter-terrorism and doing what’s right for Northern Ireland in respect of economic matters” were among the issues being discussed.

The Prime Minister is not going to be present as negotiations continue because she is heading to Paris for a meeting with President Emmanuel Macron.

Before her departure for France, Mrs May addressed MPs in the Commons, calling on Parliament to “come together in a spirit of national unity”.

She made a self-depreciating joke after John Bercow was re-elected as the Speaker, quipping: “At least someone got a landslide.”

The Prime Minister made no mention of the ongoing deliberations in the Commons, but Jeremy Corbyn did.

Using Mrs May’s election slogans against her, the Labour leader said: “I’m sure we all look forward to welcoming the Queen’s Speech just as soon as coalition of chaos has been negotiated.

“If that’s not possible, the Labour Party stands ready to offer strong and stable leadership in the national interest.”

Under the confidence and supply arrangement being mooted by the Tories and the DUP, the Northern Irish party’s 10 MPs would lend its support to the Government for key votes – such as passing the Budget and the Queen’s Speech.

Sinn Fein has said the prospect of a deal between the Conservatives and the DUP is causing anxiety and fear, with the party warning it could have implications for power-sharing talks in Northern Ireland.

Despite this, the party’s seven MPs have stressed they will not be taking their seats in the Commons, and claimed doing so would be against the wishes of those who voted them into office.

“Westminster has brought us austerity, has brought us hardship, and it has hurt the working class people in our communities,” one of their MPs told reporters at a news conference in London. (SKYNEWS)