NATO to increase support for Ukraine 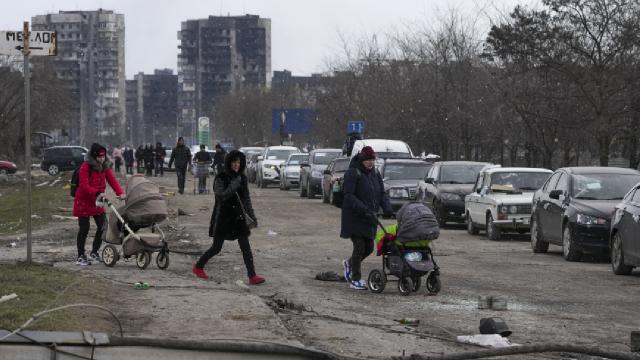 “We discussed what more we will do, including cyber security assistance, and providing the equipment to help Ukraine protect against chemical and biological threats,” he said.

Speaking at a news conference, he said allies are providing a wide range of different weapon systems, both the Soviet era systems, but also modern equipment.

He would not give specifics about the type of weapons or the timeline when pressured about the Ukrainian foreign minister’s earlier comments that they may not be delivered quickly enough (see 14.26 post).

NATO members also agreed to do more to help other partners and shore up their ability to defend themselves, including Georgia and Bosnia and Herzegovina.

‘Help now or many more will die’

Ukraine’s foreign minister has indicated that his country will receive more weapons from its NATO allies but talks are still being held to determine when that will happen.

“Either you help us now – and I’m speaking about days, not weeks – or your help will come too late, and many people will die,” Dmytro Kuleba said at a news conference amid NATO talks.

He said he is being told it will take time to provide the weapons Ukraine is demanding but “we have no time”.

He accused allies of “acting only after tragedies like Bucha occur”.

He called existing sanctions “insufficient” and repeated calls for a ban on Russian oil and gas imports which are supporting the Russian “war machine”.

“How many Buchas have to take place for you to impose these sanctions?” he said.

WHO preparing for possible ‘chemical assaults’ in Ukraine

The World Health Organisation(WHO) is preparing for possible “chemical assaults” in Ukraine, according to one of its officials.

Hans Kluge, WHO regional director for Europe, said: “Given the uncertainties of the current situation, there are no assurances that the war will not get worse.”

“WHO is considering all scenarios and making contingencies for different situations that could afflict the people of Ukraine, from the continued treatment of mass casualties, to chemical assaults,” he said, without providing further details.

He said Russian forces are trying to encircle Ukrainian troops in the region.

He said the southern city of Mariupol was holding out and that he believed the Russian efforts to surround Ukrainian troops in the east would be in vain.

“The situation is under control,” he said on national television.

Mr Cavusoglu made the offer to his Ukrainian counterpart Dmytro Kuleba as NATO members today agreed to strengthen support for Ukraine amid its ongoing war with Russia.

Speaking from Brussels, Mr Cavusoglu also said there were still around 30 Turkish citizens, including their companions, stuck in Ukraine’s southern port city of Mariupol.

‘Cyprus Flight Pass’ to be end from April 18