Day-Mer marched against racism in London

Anasayfa » News In English » Day-Mer marched against racism in London 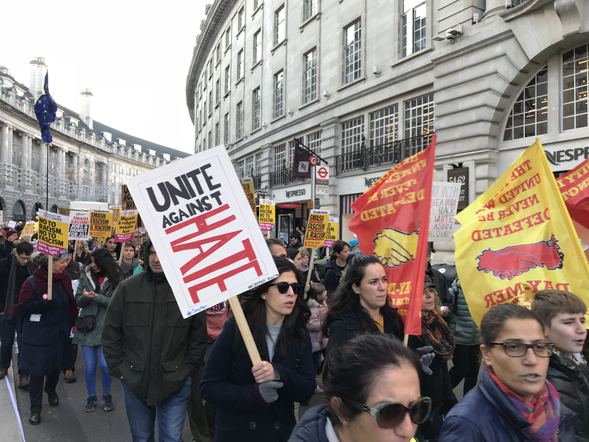 Tens of thousands marched across London today for Anti-Racism Day to stand up against racism, fascism, division and the rise of the far right.

The timely #November17Unity march began at the BBC in Portland Place (where any large demonstration hoping to reported now starts) to Whitehall.

Day-Mer also attended to the demonstration which occurred on 17 November.

While protesters registered their opposition to the rise of the far right, the nationalist and pro-capitalist programme of rally organisers provided no basis for workers and youth to fight the far right. This was reflected in the event’s official title, “National Unity Demonstration Against Racism and Fascism.”

The perspective of “national unity” against fascism is aimed at suppressing the independent mobilisation of the working class against capitalism.

An appeal for the rally was made on November 1, with a statement published in the Guardian signed by a long list of Labour MPs and trade union bureaucrats, including key Corbyn allies John McDonnell and Dianne Abbott.

“The impact of neoliberalism and austerity … has driven the growth of the far right,” wrote the signatories, without mentioning that austerity and cuts are currently being enforced by Labour councils across the country on behalf of the Conservative central government.