A PRESS conference was held in the headquarters of the British Alevi Federation in London for the anniversary of the MARAŞ massacre. 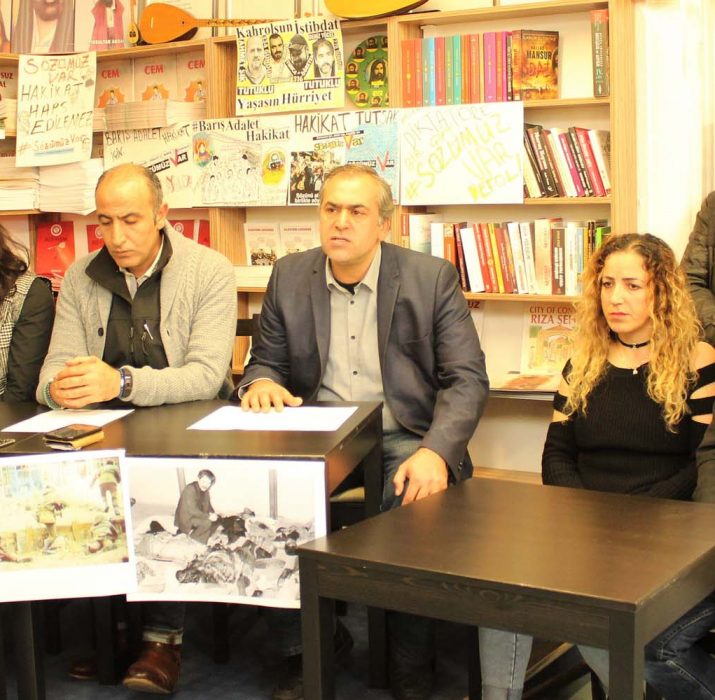 A PRESS conference was held in the headquarters of the British Alevi Federation in London for the anniversary of the MARAŞ massacre. The President of the British Aevi Association (BAF), İsrafil Erbil, stated that they had carried out this press conference with the aim of ‘marking the 39th anniversary of the Maraş Massacre, the pressures on academics and journalists today, to draw attention to every kind of lawlessness’.

Reading the press statement prepared by the British Alevi Federation, Hull Cemevi President Miray Kaplan said “39 years ago in the streets of Maras against all humanity, crimes against all oppressed peoples were processed. Women, men, children, young and old were shot, burned, tortured and burned. The Maraş Massacre is neither a group nor a group of massacres committed by massacre. This massacre is a planned, organized Alevi massacre. With the support of the local government, the people were provoked against the Alevis and the ground for the massacre was prepared. We condemn the Maraş Massacre in the 39th year. We have not forgotten the lives we lost in Maraş, we will not forget it.

The history of the Alevi’s is full of massacres they are subjected to. In the Maras Massacre, the tombs of the people we lost are lost and the burial places are not certain. We demand that the places of the graves be identified. The state should apologize and explain the places of the graves immediately, and fulfil their material and spiritual duties against the families of our affected souls, who have lost their lives in the massacre, from their homes. The Maraş Massacre must be mentioned as a monument and a story of the poem and should be conveyed to future generations as a story of embarrassment. In addition, a newspaper along with other Alevis massacres should be taught in schools, not as a third-page news.

Many countries in the world have perceived massacres in their history as crimes against humanity and have made their memorials. For example, Germany sees people who have been massacred by the Nazi fascism as a historical shame and makes it necessary as a state. Both memorial events and the Nazi camps clearly convey the facts to the people so that they will not be experienced as memorial events but memorials that are wanted to be done in Maraş for the last 7 years in Turkey are not allowed. We invite the state to respect the suffering and history of its own people. We will definitely be in Maraş so that, in order to keep the mourning of the people we lost in the 39th year of the Maraş Massacre on December 23rd.

“WE HAVE A PROMISE”

Journalist-writer Akın Olgun said in a press release titled “There is a Controversy” against the press and the restriction of freedom of expression “We go through hard times. We know that the best medicine of such times is to walk hand in hand, arm to arm, shoulder to shoulder, all together. That’s why, by resisting the ten pressures on us; to reduce our passion for peace and freedom, to blind our conscience and our justice, to allow our commitment to truth to diminish; we are talking about our future without giving up. Yes we are stubborn, we are not giving up. Because we have the word! Freedom and peace is all we want. We have a proposal for young people, children, women, the world, today, tomorrow. Yes we have a word! Because we know: Fascism starts where the promise ends! “