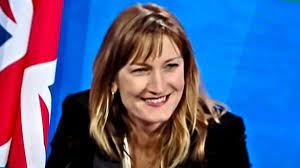 News In English
0
0
A+
A-
The Met is to examine leaked footage of senior No 10 aides joking about a Christmas party which Downing Street has denied ever happened.

It has just emerged Allegra Stratton, who at the time was the Prime Minister’s press secretary, was seen being questioned about reports of a Downing Street Christmas party last year.

The leaked footage, obtained by ITV News, was reportedly filmed as part of preparations for televised briefings by Ms Stratton – which was then abandoned.

It is reported the party took place on December 18 at a time when such gatherings had been banned under pandemic restrictions.

Ed Oldfield, a special adviser to the prime minister, asked her on the footage: “I’ve just seen reports on Twitter that there was a Downing Street Christmas party on Friday night, do you recognise those reports?”

Ms Stratton replied “I went home” before a discussion with colleagues about whether the event was a “cheese and wine” evening.

She added: “This fictional party was a business meeting … And it was not socially distanced.”

A Met police statement said: “It is our policy not to routinely investigate retrospective breaches of the Covid-19 regulations, however, the footage will form part of our considerations.”

In response to the footage showing No 10 aides apparently joking about a Christmas party during the 2020 lockdown, a Downing Street spokesman said: “There was no Christmas party. Covid rules have been followed at all times.”

In response to ITV’s report, a Downing Street spokesman said: “There was no Christmas party. Covid rules have been followed at all times.”

Ministers are yet to explain how the alleged bash complied with the rules in place at the time, despite coming under pressure since an initial report in the Daily Mirror.

The newspaper said two events took place in No 10 in the run-up to the festive season last year, including Mr Johnson giving a speech at a leaving do during November’s lockdown.

The other was said to be a staff party in December where party games were played, food and drinks were served, and revelries went on past midnight.

At the time, the Tier 3 rules explicitly banned work Christmas lunches and parties where it is “a primarily social activity and is not otherwise permitted”.

As the government came under mounting pressure over the video leak, Health Secretary Sajid Javid pulled out of national interviews on Wednesday morning, while vaccines minister Maggie Throup was understood to have cancelled a planned round of regional television interviews.