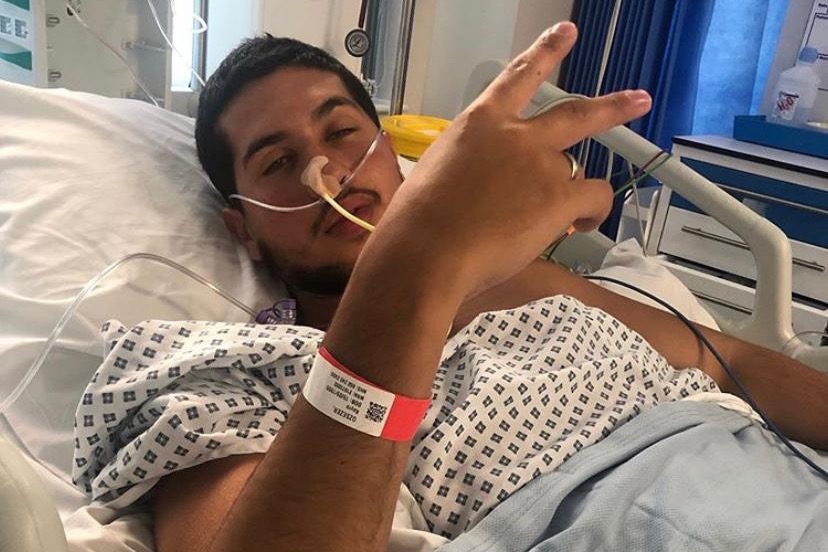 A devastated bride-to-be whose fiancé received a shock brain tumour diagnosis after nearly crashing their car on holiday in Cyprus spoke with the mail online about how they are now struggling to make ends meet after she gave up her dream job to care for him.

Ariona Kryeziu, 20, of North Acton, London, said the news Kayra Ozsezer, also 20, only has a 50 per cent chance of living beyond 10 months ‘hit her like a bus’. 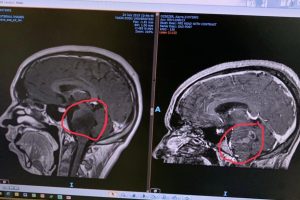 Kayra, who was working as a waiter and collaborating with Ariona on a clothing line, has a diffuse midline glioma – a malignant and and fast-growing tumour in his primary central nervous system.

The couple, who have been together three-and-a-half years and got engaged on Valentine’s Day in 2017, were planning to get married in December,  but now Ariona is desperately trying to raise £25,000 for Kayra to travel to Germany to try an alternative treatment not available in the UK.

She has set up a GoFundMe page which has already received just over £14,000 in donations, as Ariona, a nursery school worker, admitted the pair are ‘barely affording to stay afloat’ as neither of them are able to hold down their jobs as a result of what’s happened.

Speaking about Kayra’s diagnosis, Ariona told the mail online’s FEMAIL she was in ‘extreme denial’ at first and refused to believe her ‘best friend’ had such a life-threatening illness.

‘After his biopsy, when they diagnosed his with stage 4, I automatically had a panic attack,’ she admitted.

‘It was like being hit by a bus. It was a massive shock and something that really hurt, but with time I became more focused on him getting better and what steps I’d need to take to keep my best friend alive…”

Their holiday in Cyprus in July was their last one before their wedding, and the couple hired a car as Kayra had just got his driving licence two months previously.

When they arrived, Ariona recalled how he began experiencing dizzy spells and random aches and pains.

‘One eye appeared more drooped while his other eye was stuck wide open,’ she explained.

‘Throughout the holiday things just got worse. The last straw was when we nearly crashed – he was overtaking a car but couldn’t see the lorry approaching.’

At a hospital in Cyprus, a doctor told Kayra one side of his face was paralysed. He underwent two scans and was given the devastating news that he had an extremely large brain tumour. 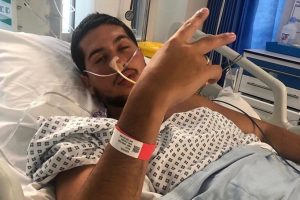 Back in London on July 29, Kayra had a biopsy taken which caused him to suffer a seizure and be admitted to intensive care.

‘We were told he had to stay by himself and the visiting times were only 2pm until 7pm,’ Ariona said.

Adding ‘He wasn’t allowed to eat or drink for days and he constantly begged me to give him water. It was horrible having to say no, I’d have to dip a sponge in water and hydrate his lips and mouth and he’d try to suck up as much liquid as possible.’

‘It went from Kayra being on holiday, walking, talking and having a great time, to him not being able to walk very well, finding it difficult to talk and understand others around him,’ Ariona said.

‘He couldn’t close one of his eyes so I’d have to tape it shut; even simple things like waking up during the night to go toilet, he’d need assistance with.

‘Since then Kayra has undergone radiotherapy and tried a chemotherapy trial called Everolimus, which was then discontinued in England as it was deemed ineffective.’

Prior to their holiday, Ariona was promoted to her ‘dream job’ as a pre-school room leader and childcare representative for the nursery she worked in.

However, after a few days back in London she had to leave the post to look after Kayra.

‘We’re barely affording to stay afloat,’ she admitted. ‘We’ve been having quite bad financial issues as it’s been very hard to get help, but I’ve tried to stay focused on the positives.’

Ariona said a doctor informed her half of patients with Kayra’s condition die within 10 months and only five per cent make it past two years.

‘It broke my heart, and that’s when I realised I needed to do something else,’ she explained.

‘I have looked at so many different options and have recently been more drawn to immunotherapy and nanotherapy, which are available in Germany.

‘One of the main reasons I started a GoFundMe page was to get the attention of doctors and see if anyone could suggest treatment, which has happened.

‘After the first £500 of donations I was in tears; it was nice to know I’d been able to touch some people with what I wrote and people fell in love with Kayra as much as I did.

‘It’s just incredible and I reply to everyone that donates and have had so many conversations and phone calls with people being so supportive.’