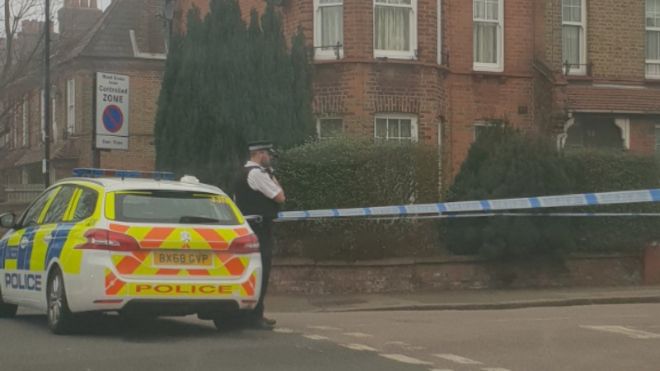 A teenager has died after he was stabbed by a gang wielding knives, guns and a samurai sword in north London.

Scotland Yard said officers were called to reports of a group of people fighting on Vincent Road, Wood Green, just before 20:10 GMT on Friday.

The 19-year-old was taken to hospital but died just after 03:00. Next of kind have been told.

A man, 20, was also stabbed in the attack as well as being shot. His condition is non life-threatening.

No arrests have been made and police have appealed for witnesses to contact them.

Officers said the gang were all riding bikes.

“I know that there are people who either witnessed the incident or who can assist with filling in the gaps in the information we already have.”

She added: “I know that people may be reluctant or afraid to speak with police, but making a single call could help to remove dangerous, violent individuals from your area and all information provided will be treated in the strictest confidence.”

Earlier, the Met Police said the man who died had been shot but this was later corrected to say it was the 20-year-old who had gunshot injuries.