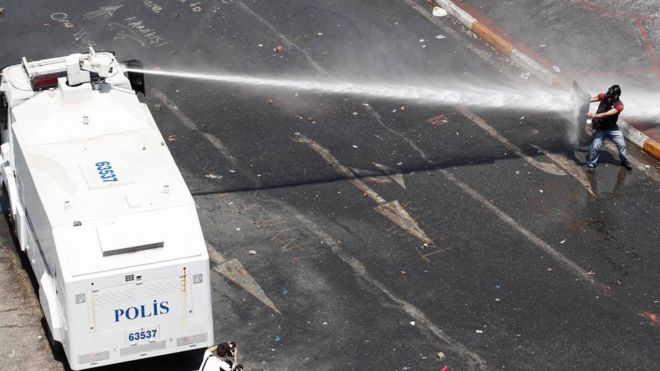 THREE water cannon bought and refurbished for more than £320,000 while Boris Johnson was London Mayor have been sold for £11,000.

The vehicles were bought by Mr Johnson as crowd-control weapons following the 2011 riots.

They were sold for £11,025 to Nottinghamshire-based Reclamations (Ollerton) Ltd who will dismantle them and export the parts.

Current Mayor Sadiq Khan said “we have managed to finally get rid of them”.

The vehicles were bought by Mr Johnson from Germany in 2014 and he volunteered to be blasted by one of them to reassure people of their safety.

Then-Home Secretary Theresa May banned their use in riot situations in England and Wales in 2015, and later used the purchase to ridicule Mr Johnson in the Tory leadership race after David Cameron resigned.

Water cannon have been used in Northern Ireland but have never been deployed in the rest of the UK.

Mr Khan said: “For too long, London taxpayers have had to bear the brunt of Boris Johnson’s appalling botched water cannon deal. This has been another waste of taxpayers’ money by Boris Johnson.”