94th years of Republic was celebrated with enthusiasm in London

ENGLAND Turkish Federation of Associations celebrated the 94th anniversary of the establishment of the Republic of Turkey in London. 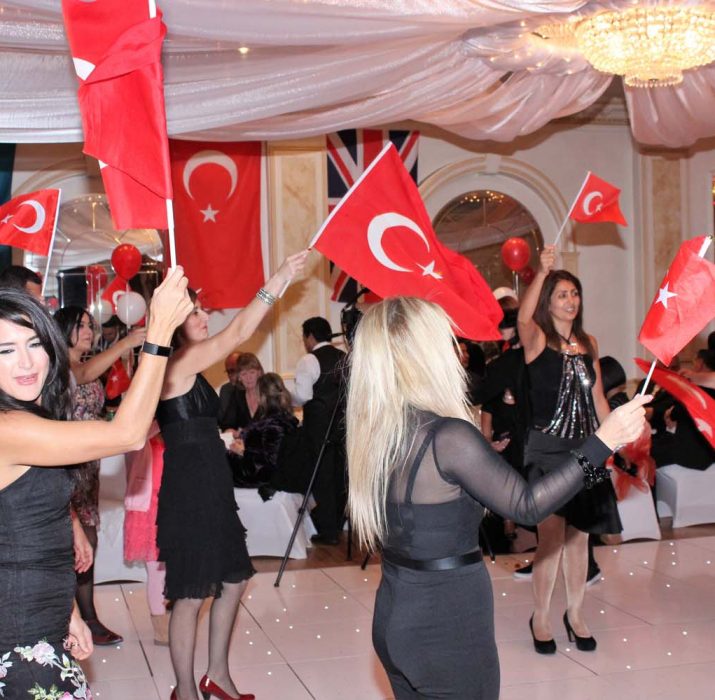 ENGLAND Turkish Federation of Associations celebrated the 94th anniversary of the establishment of the Republic of Turkey in London. Many people joined together at the celebratory dinner and dance with famous faces and the public attended with great enthusiasm to celebrated the  Republic of Turkey. CHP Izmir Deputy Tuncay Özkan, journalist – author Ümit Zileli, Enfield North councillor Joan Ryan MP and Ersin Faikzade were all honoured guests. It was learned that about 400 guests attended the event presented by Melek Yalçın and Bilgen Tuncay. The dinner and dance saw familiar face such as Counicllor Yasemin Brett, Alev Cazimoglu, Can Özşen and Ersin Çelebi were all in attentens.

WE ALL HAVE AN IMPORTANT DUTIE

Jale Özer, President of the England’s Turkish Federation of Associations, started the night with her opening speech today, expresses the happiness of congratulating the Republic of Turkey on its 94th anniversary, she said: “Today, we live with great enthusiasm for the honour and pride of celebrating the 94th anniversary of the Republic of Turkey, which was established with the rebirth of the Turkish people. I wonder how much we would like to say to all of us, “Our Republic Day,” which is our greatest holiday. But today there is no secular, democratic, anti-imperialist, independent Republic of Turkey founded by Ataturk, taken hostage by the counter-revolution and its external supporters. Our Republic, founded in 1923 by Mustafa Kemal Atatürk, is a self-governing parliamentary entity based on secularism, separation of powers and democracy. One of the most important features was that it was a state of law. Today, none of these properties are carrying. The unsuccessful Fethullah Gülen coup that took place on 15 July 2016 declared power as an opportunity and declared a state of emergency and aimed to silence all the opposition on the pretext that we are liquidating the Decrees of the Law and the members of the FETO. With the constitutional amendment made on April 17, 2017, our regime was completely changed, and the authoritarian one man regime, which will take our country from the contemporary democratic parliamentary system to the medieval darkness, has been passed…”

Invited to speak, the honorary guests, praised by the Labour Party’s Enfield North member of parliament Joan Ryan talking about Atatürk, said: “While there are no women’s rights in England and the world, Ataturk gave women the right to elect and to be elected. Atatürk was one of the greatest leaders of his time. You are very lucky that you have such a leader and you are left to inherit such a Republic. There are a large number of Turkish voters in our region, and they have great contributions to us. I would like to sincerely congratulate everyone on October 29th Republic Day. I am very happy to be invited to such a night. ”

12 YEARS OF WHICH 6 SPENT IN PRISON
CHP deputy Tuncay Özkan, said that it’s been 12 years since he hasn’t been to London and sadly had to serve 6 years of painful days he lived in prison, caused the guests showing sympathy. Talking about the importance of democracy and the Republic, Tuncay Özkan said: “Our Western friends always say the same thing today; ‘Great leader Mustafa Kemal Atatürk.’ I thank them because they rediscovered Atatürk and reminded them of Ataturk. I thank them very much. This will also be a new beginning for them. But we will all continue to make an old fondness and a journey of great love. ”

Another honorary guest, the famous journalist-writer Ümit Zileli, remarked on the importance of Republican consciousness in his speech: “This Republic, which is given to us by the great leader Mustafa Kemal, is used very hilariously. We’ve been suffering for 15 years. This Republic, which is a gift to us, has great duties to all of us, especially women, to live forever.”
On the night, Tuncay Özkan, Umit Zileli and artist Faikzade, Esengül Şaşı, Doğan Örs, Ziya Akşahin and Muslüm Alataş were awarded by distinguished names for their success. Ersin Faikzade, who gave a mini concert at the end of the night, finished his program with the Izmir March and the 10th Year March. Afterwards, Özgür Canyurt-Tuğba Özcivan duo, Melek Yalçın, Baha Yetkin, Ercüment İbrahim and Hüseyin Cemgünal, who came to the stage, enjoyed the night till late hours.