“Don’t remain quiet on the massacre in Syria”

London has joined the list of areas that protested against the organised attacks in Aleppo and other cities in Syria. 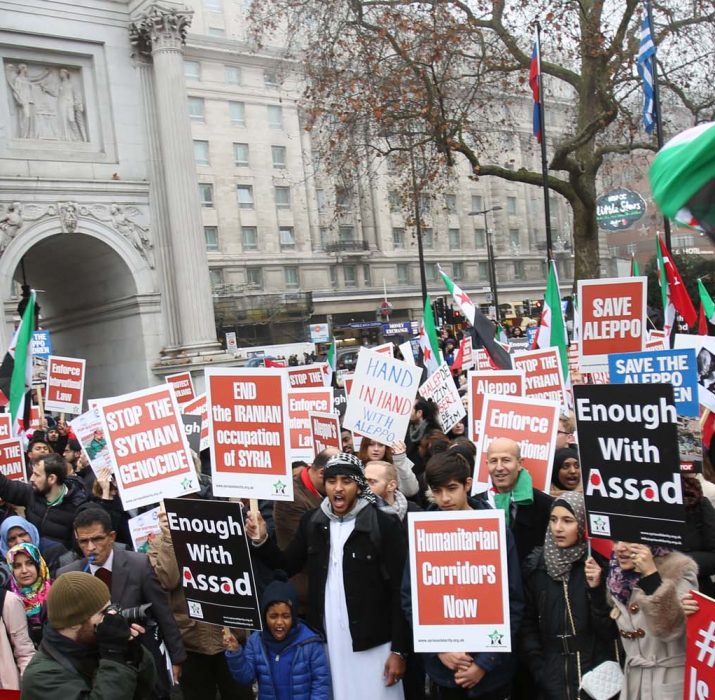 London has joined the list of areas that protested against the organised attacks in Aleppo and other cities in Syria.

On Monday last week at Hyde Park, thousands of people gathered with signs and banners lashing out at Syria’s leader Bashar al-Assad and his presidency.

The crowd that was organised through social media consisted of Londoners and a large number of Turks.

Turkish and Syrian flags were spread out across the scene whilst signs reading: ‘Freedom in Syria’ and ‘Don’t Remain Quiet for the People of Aleppo’ drew attention.

A HELPING HAND NEEDS TO BE SENT TO SYRIA

The Marble Arch Underground Station’s Hyde Park exit was crowded with a multitude of protestors. From Oxford Street, one of London’s busiest streets, the protestors were accompanied by police all the way up to 10 Downing Street.

Whilst the traffic-stopping march was at Oxford Street, photographs and videos taken by a large number of Christmas shoppers and passersby went viral on social media.

The international crowd that joined the protest at Downing Street pleaded for the UK Prime Minister Theresa May to urgently send a helping hand to Syria.

The march that was organised by the British Syrian Solidarity Campaign and supported by the Union of European Turkish Democrats (UETD UK), the British Muslim Association and the Islamic Community Milli Görüş (IGMG) took place for up to three hours.

“WE NEED TO SAY ‘STOP’ TO THIS PERSECUTION”

In the UETD leader Turhan Özen’s rally speech for Aleppo, he wished for the Syrians to see an immediate end to the traumatic events.  He urged politicians to do what was necessary. “Syria is experiencing a huge massacre and unfortunately politicians remain quiet on the matter. These policies should not be made and the massacre of civilians should not be permitted.

I think we should raise our voices louder and support our Syrian brothers and sisters that are on the streets in these harsh winter conditions. We need to say ‘stop’ to persecution and not remain quiet on this crime against humanity” Özen said.