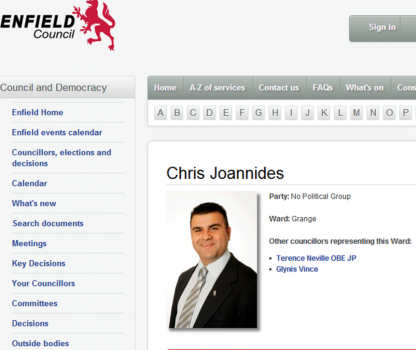 Chris Joannides has been expelled from the Conservative Party

AN ENFIELD councillor who shared a Facebook post comparing women in burqas to bin bags has been expelled by the Conservative Party.

Chris Joannides will not be permitted to defend his seat in Grange ward this May after Conservative Central Office overruled an earlier decision by party members in the borough to let him stand.

Members of the Turkish and Muslim communities accused him of Islamophobia last winter after it emerged his Facebook account contained photographs likening women and children dressed in burqas to rubbish bags.

He has been cleared of any criminal wrongdoing, but he remains under investigation following a complaint about his conduct to Enfield Council.

Joanne McCartney, Labour’s London Assembly member for Enfield and Haringey, told the Evening Standard: “This was completely inappropriate for an elected representative.

“Residents have to be confident that people who make decisions on their behalf have the well-being of everyone at heart. The comments undermine that trust and confidence.”

But Mr Joannides told Londra Gazete that the media coverage of his story had been “one-sided”.

“I have never been anti-Islam,” he said. “People who trust and know me will know this and not what was instigated on Facebook.

“I openly supported the twinning of an Istanbul district (Sarıyer) with Enfield, in the local Greek press as well.

“I also support Turkey’s accession to the European Union, despite the Cyprus dispute.”

Deniz Houssein, a Turkish Cypriot living in Hertfordshire who described himself as a friend of Mr Joannides, said the decision to expel him was “unbelieveable”.

“I believe there has been a great injustice to him,” he said.

“For the sake of the Conservative Party, Chris must be sacrificed.”

Mr Joannides also denied reports in the Enfield Gazette & Advertiser that Republic of Cyprus president Nicos Anastasiades had written to Foreign Secretary William Hague in an attempt to intervene in Mr Joannides’s suspension.

He said: “It must be a rumour. I don’t think a foreign president would interfere on party matters.”

Cllr Joannides was cleared by both the Crown Prosecution Service of breaking any laws in November.

Mr Joannides had been suspended by Enfield Conservatives in February last year after he posted a photograph of a woman and child dressed in burqas, with a black binbag on either side of them, on his Facebook page.

The comment underneath read: “I saw her standing there and I told her she had three beautiful children. She didn’t have to get all pissed off and threaten me. It was an honest mistake!”

He was readmitted by Enfield Conservatives and nominated as a candidate for this May’s local election, but this decision was overruled by Central Office this week.

A spokesman for the Conservative Party said: “Chris Joannides is not endorsed as a Conservative Party candidate in the forthcoming local government elections in the London Borough of Enfield in May 2014. No appeal is permitted under party rules.

“Furthermore, Mr Joannides is expelled from the Conservative Party for a period of 12 months. He may appeal against this decision and it is our understanding that he intends to do so.”

A spokesman said: “This matter is under investigation [by the council] and until that is completed there is nothing further we can say.”