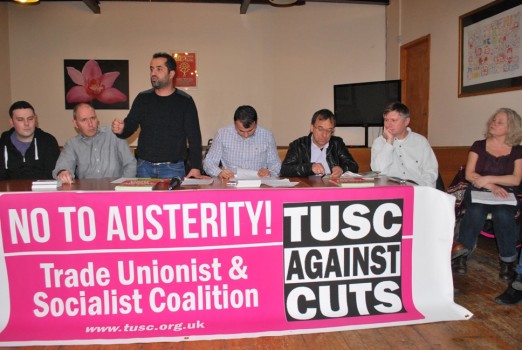 A socialist alliance that emerged four years ago has nominated a number of Turkish candidates to run in May’s local election.

The Trade Unionist and Socialist Coalition, which counts RMT general secretary Bob Crow among its supporters, has unveiled “No to austerity” as its campaign slogan.

The candidates it unveiled at a meeting this week included Oktay Şahbaz, director of the Turkish and Kurdish community centre Day-Mer, and İbrahim Avcil, known for his work in the community.

Mr Şahbaz, the TUSC council candidate for Seven Sisters ward, spoke of the need to oppose the austerity measures introduced by the coalition government with a strong and powerful voice. He said the measures were affecting Haringey Council and said it was important to voice the concerns of ordinary Tottenham residents.

For his part, Mr Avcil said the TUSC was vitally important in the campaign against capitalist parties. Pointing in particular to candidates of Turkish origin in the Labour Party, he said: “It does not matter how good their intentions are. They too are being crushed in the cycle of regular parties.”

Another candidate in Haringey is Dilan Seçkin, who said that problems relating to young people are on the increase and that debt was now a serious problem for every student. The situation is not helped, she said, by youth services being progressive withdrawn by Haringey Council.