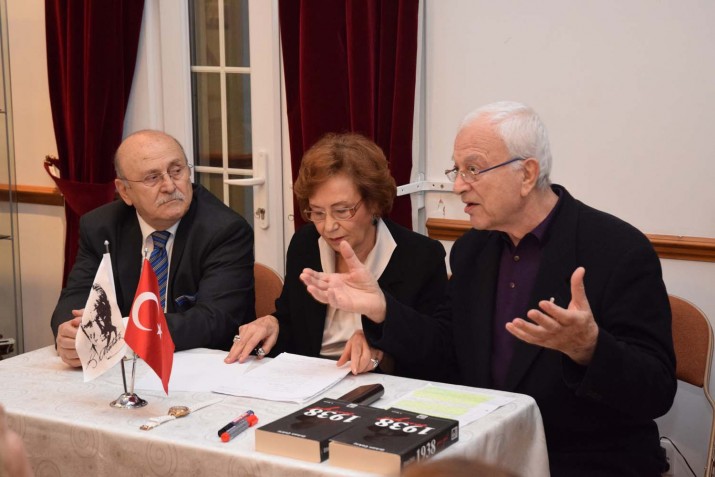 GREAT LEADER AND Soldier Mustafa Kemal Atatürk has been remembered in a memorial and meeting held by IADD- (Thinking on the way of Atatürk British Union), where discussions of current problems also took place.

Before and after the anniversary of Atatürk’s death on 10th November, remembrance events are continuing to take place. Tens of people came together beforehand on Sunday 8th November at the Azerbaijan House to discuss problems by looking at them with an Atatürk perspective.

Following a minutes silence, the singing of the Turkish National Anthem and a reading of another Atatürk piece (Gençliğe Hitabe) was read out by Hümeyra Aksoy and then Turan Erdemgil, TRT and BBC TV and Radio show producer was first to talk.

Turan Erdemgil explained that on memorial days like these there is no need for dramatic or emotional words, he said: “Can we really understand Atatürk?” Being  a follower of Atatürk means continuously looking forward and focusing on intelligence. Kemalism came about towards the end of the Ottoman Empire and then began to blossom. He also explained that the AKP party is dragging Turkey into a disaster and division. Abdullah Nihat Yılmaz also spoke following Mr Erdemgil, he discussed that for Turkey to become a democracy and fully understand it, imperialism needs to be abolished completely and to do so a lot of work must take place.

A reading of poem ‘Knock down my Statues’ by Süleyman Apaydın was also read out by Burçak Dikmen. Host and Head of Azerbaijan House Dr. Ali Tekin Atalar spoke of the admiration of Atatürk by people from Azerbaijan and recordings of songs and opera’s for  Atatürk were also shared. The event continued with complimentary offerings of Atatürk’s favourite foods.