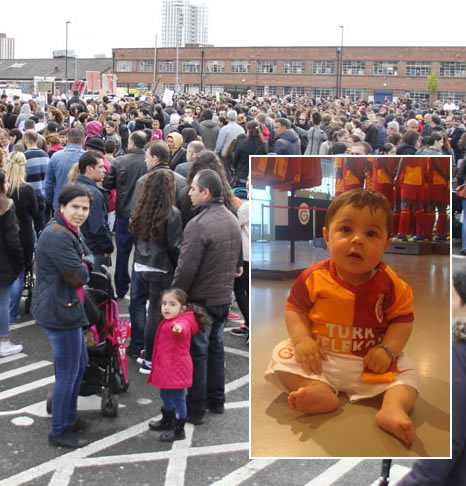 Over a thousand people gathered outside a North London hospital on Saturday to protest the death of a Turkish-speaking toddler.

The family of Armağan Denli, 3, who died of a bacterial meningitis infection last weekend, say negligent healthcare caused the death of their son at North Middlesex Hospital.

Armağan’s parents took him to A&E when he became ill but were sent home after being told the toddler had chickenpox. He was readmitted shortly before 3am the following morning and died of a bacterial meningitis infection.

Speaking after a meeting with North Middlesex chief executive Julie Lowe, Yücel and Fatma Denli said: “We are utterly devastated by the death of our son and believe he was misdiagnosed when we first took him to hospital on 18 April.

“His death could have been avoided if the hospital had been efficient and timely in its response.

“We spoke to hospital directors during the demonstration and they have promised us a full investigation. We are now waiting for the outcome.”

A spokesman for North Middlesex confirmed an investigation into Armağan’s treatment was underway: “We have invited a leader from the Turkish Medical Association to be involved in the investigation because we want to build trust with our local community.”

Yücel and Fatma Denli spoke to camera crews during the demonstration

He continued: “Bacterial meningitis is notoriously difficult to diagnose in its early stages.

“It may be accompanied by a fever and a rash but it is difficult to distinguish from other common illnesses such as flu without invasive tests that can pose a risk to patients, particularly young children.”

Director of Nursing Paul Reeves added that Armağan had been carefully monitored after he was first admitted to hospital.

He said: “The initial findings do not suggest any negligence by our staff and suggest that they gave appropriate care in line with what would happen in any NHS emergency department.

“We will share the full results of the investigation with Armağan’s family as soon as we can.”

Both organisers and hospital officials estimated more than a thousand people attended Saturday’s demonstration, which protestors attended with banners and t-shirts carrying photographs of Armağan.

One banner read “Sent to death from A&E”. Another said “We do not want to be next”.

The Democratic Joint Forces (DGB) platform, which organised the event, said they instructed all participants to remain quiet out of respect to patients at the hospital.

It has argued healthcare standards at North Middlesex were plummeting and doctors and nurses were under pressure and overworked.

The DGB said the cases of Armağan and 30-year-old Murat Alaboğaz are examples of how Turkish speakers in Britain suffer more than most patients because of their poor English: “they are unable to explain their symptoms to staff who do not have the time to listen”.

The North Middlesex spokesman said the hospital’s A&E department was one of the busiest in London: “We meet all the key London NHS Quality Standards and have a consultant paediatrician on site until 10pm every day and consultant cover across the hospital 16 hours a day, every day.

“We aim to provide high quality services for all our patients and are committed to continuing to do so.”