For our Election 2015 series, we speak to Enfield Southgate MP and Conservative candidate David Burrowes 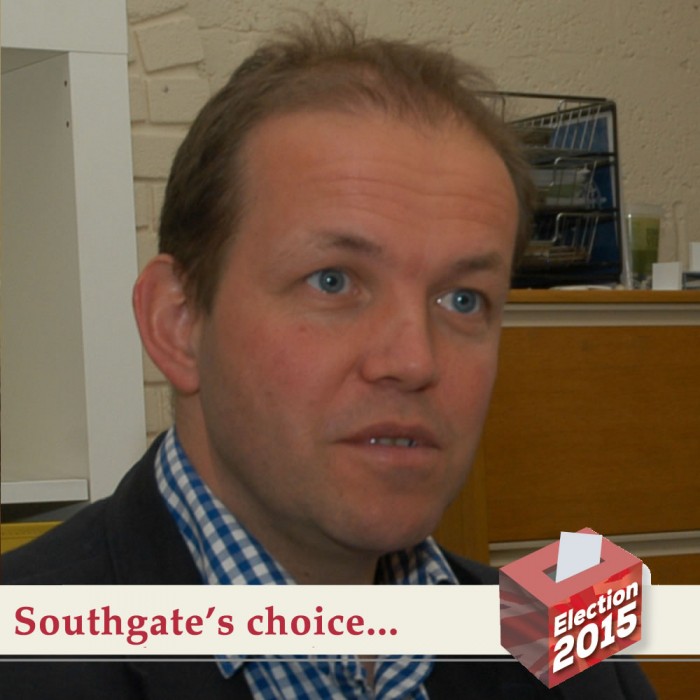 Other candidates in Enfield Southgate

Stare at a photograph of the lively shops facing Southgate Green and you would easily believe you were looking at a wealthy rural village rather than a high street in North London. The area feels leafy even in the depths of February and there isn’t a boarded-up shop in sight.

“It’s fine, everything’s fine,” smiles the woman behind the counter at the hairdressers as David Burrowes, her local MP, asks how business is going. He’s handing out letters urging small business owners to apply for the business rate discount announced by the Chancellor in the Autumn Statement.

The economy has been kind to this part of Enfield Southgate. As I move from door to door with the MP and Maria, his constituency aide, only one business owner – the manager of a high-end restaurant – complains that trade is sluggish. “Customers prefer the new Turkish restaurant in Palmers Green,” he tells us over Cypriot coffee. “But you always have my support.”

Not every constituent agrees. Since he was elected a decade ago, David Burrowes has been active on the Cyprus dispute and has made frequent trips to the divided island, particularly in church restoration projects. His position has often provoked ire among certain Turkish Cypriots – not least the Liberal Democrat Baroness Hussein-Ece – who claim he favours the Greeks in the never-ending Cyprus conflict.

The charge is familiar to him and he bats it away: “People who say that are people with their own agendas.

“It’s the wrong perception to say I’m pro-Greek. I’m pro-Cypriot, 100%. There are people on all sides [of the conflict] who are willing to be less than constructive. I’m not in anyone’s pocket, unlike a [former] MP in another constituency.”

He used his time in parliament “not just to please people” but to stand up for what people believe in, even if controversial. The Cyprus issue is one such example, he says. His decision to oppose a recent law allowing same-sex couples to marry was another.

A third issue is immigration and refugees. David Burrowes says it is a “great shame” that while Turkey is playing host to hundreds of thousands of refugees fleeing the conflict in Syria, his own country has accepted just 90.

“It’s not just about aid,” when I ask about the millions Britain sends to support the refugee camps in the region. “We need to do both. They’re being cleansed [in Syria] and they need somewhere to go.”

Immigration is a hot topic at home and I wonder whether Mr Burrowes has had trouble reconciling national policies on the subject, which are often hostile, with the diverse mix of ethnic minorities he counts among his constituents.

He admits Labour has had “a head start” in courting the migrant vote and that this has “been a problem for my party, because there is a view that the Conservative Party is not pro-immigrant.”

But most first or second generation migrants, he says, are also concerned about immigration and feel the system needs to be fair.

Speaking of the neighbourhood, I ask about the recent decision to close the emergency and maternity wards at Chase Farm, the nearest hospital in the constituency.

He nods: “It was a disappointment. My father’s life was saved there, all my children were delivered there.”

But unlike Nick de Bois in neighbouring Enfield North, he isn’t prepared to denounce the closure as mistaken: “The doctors [of the Clinical Commissioning Group] made the decision. It was their choice.”

He says lack of access to healthcare is acute for the Turkish community, particularly out of hours. He points to cross-party efforts (with Mr de Bois and Edmonton’s Labour MP Andy Love) to push for more quality healthcare in Enfield so that fewer people go to A&E.

“We have this great investment in Chase Farm,” he says. “We’ve got the future secure – provided the [Enfield Council] planning committee approves the plans on 12 March.”

Labour went through an acrimonious selection process in Enfield Southgate. Centre for Turkey Studies director Ibrahim Doğuş challenged the eventual victor, Bambos Charalambous, for the nomination and still maintains he won it by a single vote.

WHERE WAS MY CAT TOMMY?

The divisions could only benefit Mr Burrowes, who doesn’t suppress a grin when he jokes: “Turkey will know all about interesting elections. You could check if my cat Tommy was around the night Labour selected their candidate.” Turkey’s energy minister had – when asked about suspicious power cuts in Ankara while the votes were counted in last year’s local election – unconvincingly claimed a cat had crept into the electricity substation and tripped a fuse.

“I understand there was popular union support for one candidate,” he says, referring to Mr Charalambous without naming him. “It’s happened before. Look at how they picked their leader. [Ed Miliband] didn’t have majority support either.”

For political anoraks, this constituency made folklore as the site of the most spectacular result of Tony Blair’s 1997 landslide victory, when defence secretary Michael Portillo lost to Labour’s Stephen Twigg.

The late night defeat even became the title of a book, “Were You Still Up For Portillo?” Labour’s candidate this year is trying to make “Were You Up For Burrowes?” into a campaign slogan.

“It’s funny nobody says ‘Were you up for Twigg?’”, Mr Burrowes says, referring to the 2005 election, when he took the seat back from Labour. He added several thousand more votes to his majority five years later.

But Labour did extremely well on his patch in last year’s local elections, meaning this is a race no-one should be calling yet.