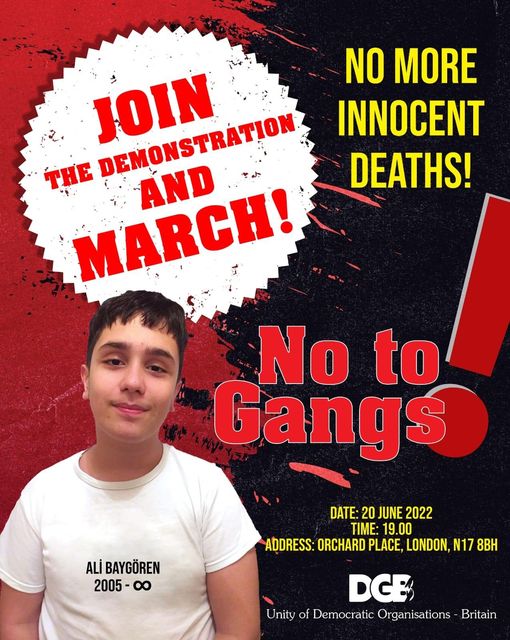 News In English
0
0
A+
A-
A teenager has been charged with murder following a fatal stabbing of Ali Baygoren in Tottenham.
A 15-year-old male was charged on Sunday 19 June with murder and will appear in custody at Willesden Magistrates’ Court today (Monday, 20 June).
On Saturday, June 18 police were called to Orchard Place in Tottenham following a report of a stabbing.
Despite the best efforts of emergency services, a 17-year-old Ali died from his injuries.
Two males aged 17 and 16 were arrested at the scene on suspicion of murder on 18 June, and have both been bailed pending further enquiries by police.
While formal identification awaits, police have confirmed the victim is Ali Baygoren from Tottenham.
Over the weekend Ali was locally named by community members and as news spread of his passing hundreds of members of the Turkish-speaking communities took to the street, marching toward Tottenham Police Station where they called for more action against gangs and knife crime by police.

Tonight June 20, a second march will be held for Ali, starting at 7 pm from where he tragically died outside of his home and ending at Tottenham Police Station.

Organisers have called for an end to gangs and innocent deaths.

Ali’s father Ibrahim spoke with the Evening Standard saying: “Ali had just finished studying as an electrician. He had three days of holiday then was killed.

“He would tell his mother ‘I’m working to give you money’. And he would say ‘Dad I’m going to buy you a new car.’ He was a good boy.

“He was on the way to work at the market but the trains were not working. So he had to walk to get a bus and then was attacked.” 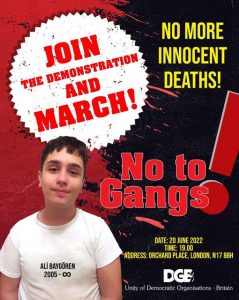