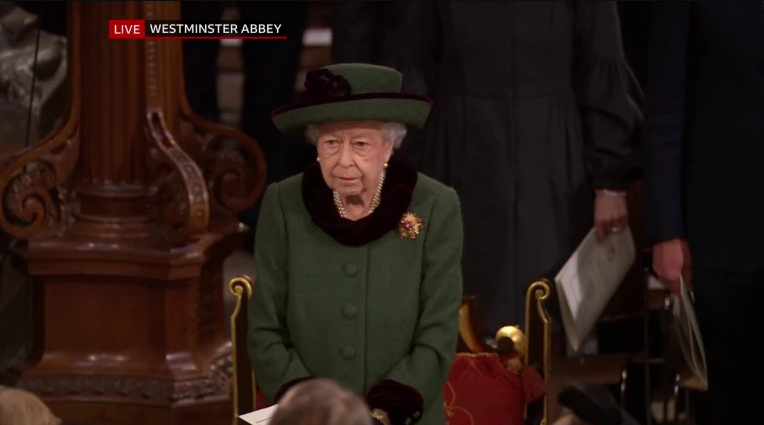 News In English
0
0
A+
A-
The Queen joined members of the royal family as she remembered her husband of 73 years, the Duke of Edinburgh, in a poignant service at Westminster Abbey.

The monarch, 95, dressed in dark green in a touching subtle tribute to Prince Philip, whose livery colour was Edinburgh Green.

On entering and leaving the service, she was accompanied by her son Prince Andrew, in what is his first public appearance since paying his settlement agreement to his accuser Virginia Giuffre and formally ending a civil case brought against him in the US

There had been concerns over whether she would be able to attend, due to recent health issues at the age of 95.

During the service, Prince Philip, who died last April aged 99, was remembered as a “man of rare ability and distinction”.

It was attended by senior members of the royal family including the Prince of Wales, the Duchess of Cornwall the Cambridges and Princess Anne.

Harry and Meghan did not attend the service, the Duke of Sussex delivered a tribute, and described Philip as “unapologetically him at all times”. “No matter where he was, no matter who he was speaking to, no matter what he was doing,” he said.

Representatives of his charities, including the Duke of Edinburgh’s Award, will be in the 1,800-strong congregation.

Before exiting the abbey, the Queen thanked those who spoke, including Duke of Edinburgh Gold Award holder, Doyin Sonibare and the clergy who took the service for her late husband.

In a tribute to Prince Philip’s legacy, Westminster Abbey is hearing from a Gold Award Holder of the Duke of Edinburgh’s Award.

Doyin Sonibare says she started the award when she was 15 and had been encouraged to take part by her mum, who is “strict and Nigerian so it’s very difficult to say no to her”.

Ms Sonibare says she “wasn’t completely sold on the idea at first” but “over the years, the award remained a prominent part of my life”.

She attributes getting her first job to the award, saying: “All the answers in my CV and interview were all related to work I had previously done with the award.”

“On reflection, I never thought I could do half of the things I have done in the last decade, yet I’ve been able to do so because of the opportunities presented to me,” she says.

“In 1956, when The Duke of Edinburgh created the award, he had a vision to create a programme which supported the development of young people all over the world. Today, you’ve learnt how his legacy has impacted me and how it will continue to impact future generations to come.”