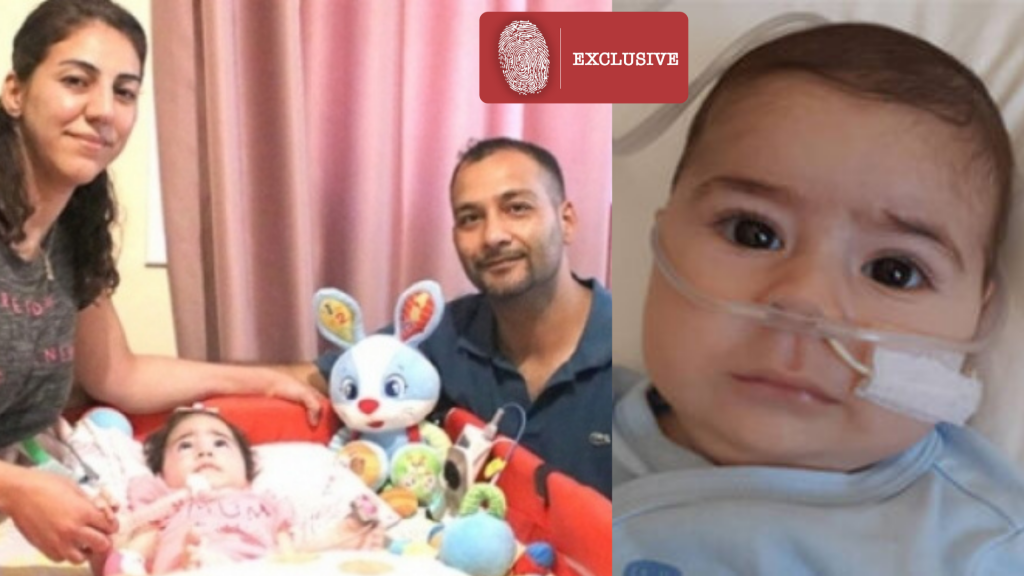 “We are not against the charity, we appreciate this. But we will follow up on the delivery of our donations as well…”

THIS past June saw a show of support from organisations and their representatives in London came together and started an aid campaign for Baby Karel, who was an SMA Type 1 patient in Northern Cyprus. Live broadcasts took place on Facebook pages to support and donations collect to help with his planned treatments. The first live broadcast was held on 28 June and the second live broadcast program was held on 5 July.

TRT, USD, EUR and GBP IBAN account numbers and bank account details of the Limassol Association UK were shown as donation points. Osman Ercen, Chair of the Turkish Community Football Federation (TCFF), said during a live broadcast on July 5th “The figure we reached on June 28 and July 5 is £33,500.”

Sadly on July 16, the news came from Northern Cyprus that 6-month-old Karel had passed away. Şeyda and Yusuf Karaoğlus, made a statement called for all the donations collected for their son to be transferred to baby Asya who was also an SMA Type 1 patient in Northern Cyprus.  Following the announcement, the TCFF published a message of condolence on its social media pages on behalf of the ‘Karel Baby Donation Campaign’ and used the following expression: “We declare that we will come together as the aid committee in a short time and announce to the people on how to use the amount collected for the aid campaign.”

Subsequent no official statement was made regarding the donation collected since. Because of this, some community members who donated began to question what purpose this amount would be used for. Based on the information obtained by the donors, it was said that the money collected was not donated to Baby Asya, who has SMA Type 1 disease in Northern Cyprus, and that a charity would be established and this amount would be used within the scope of the charity.

As Londra Gazete, we investigated this situation, which has been raising questions within the community over the last few months, considering the sensitivity of our society and our readers on this issue, a donor who reached out to Londra Gazete asked not to be named.

“It was a great honour for organisations in London to come together and carry out meaningful fundraising activity. As citizens residing here, we supported this campaign. We donated for a child who had SMA. We followed this campaign, but we did not see any official statements. I thought that this money would be transferred to Baby Asya in Northern Cyprus, it was heard that this money did not reach the family and that a charity foundation would be established. Myself and community members donated for a baby with SMA, we did not make donations for the establishment of a charity. But we will follow up on the delivery of our donations as well.

“Such a thing is unacceptable without our consent and knowledge. I believe that such occasions should not be allowed. Such behaviour will only harm future campaigns and undermine the trust of the donators. Sad news of the death of baby Karel was received on July 16, whereby we were all devastated. The treatment expenses of Baby Asya started to be covered officially from South Cyprus in mid-September. Why wasn’t this money sent to the baby Asya for two months? Maybe this child still needs this money.” was said.

We reached out to Arife Retvan, the chair of the Limassol Association UK, as the association’s bank details were used for the aid campaign. Retvan confirmed that the amount collected in the campaign is still in their bank account.

“We, as Limassol Association UK, took part in the committee created for the aid campaign launched for Baby Karel last July. For the aid campaign, with the approval of our committee members, the bank account of our association was used to collect the donations in one place. As a result of donations made for Karel, we currently have £29,044.70 in our account.

She explained that “After the death of Baby Karel, upon Niyazi Enver’s suggestion, the committee decided to establish a charity in the name of Karel baby with a majority of votes, and it was deemed appropriate to use the money collected within the framework of this charity. The charity will use the money collected especially for people in need of help in the field of health. In the first place, I presented the idea of ​​applying to the Ministry of Health (in North Cyprus) and helping the people in need, but the other suggested idea was accepted by the majority of the votes. A donation was also going to be made for the Baby Asya, but we were informed that the treatment would be undertaken by South Cyprus. We can present our bank accounts to the public, everything is transparent, so no one should be worried.”

‘NOT A SINGLE PENNY WAS DONATED’ 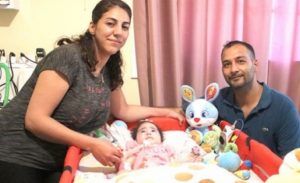 Baby Asya with her Mother and Father Ozan Polatlı

Londra Gazete, we reached out to Ozan Polatlı, the father of baby Asya, and asked if any donations were made by this committee for Asya. Ozan Polatlı emphasized that only promises were made for donations. “In August, the chair of the Turkish Community Football Federation, Osman Ercen, came to Northern Cyprus for a holiday and I met him personally. He said that they would donate the donations they collected for Karel, to my daughter Asya. Osman Ercen promised to donate around £35,000 when he returned to London, but not a single penny was donated. Promises were made to us but they were not kept. Osman Ercen stated that the money would be sent when he returned to London, and then he said that the committee should come together and hold a meeting. I no longer trust him. My sister, who lives in London, was in contact with Hüseyin Hoca.”

Ozan explained that his daughter journey is not over. On August 23rd baby Asya was take to Turkey for Spinraza treatment which was covered by the Turkish government, in September she was given them $2.5 million drug Zolgensma in South Cyprus and coved by the government there.  However Baby Asya still needs 4 more does of Spinraza which cost $75,000 each, as well as speciality equipment she needs during this treatment process, which they are raising funds for.

We reached out to the Committee Chair İrfan Davulcular for a statement on the fundraised donations: “As part of the campaign we put forward for Karel baby, we carried out a successful work together. Due to my hard work, I was deemed worthy of temporary chairmanship by my committee friends. Erdoğan Baca was elected as the vice-chair. Thanks to our community members, colleagues, family and friends who contributed to this campaign. During the campaign, some money was sent to Karel baby’s family’s account. After the loss of Baby Karel, we made an important decision, we decided; instead of sending money to personal accounts, we would view the hospital reports and paying the treatment costs to the hospitals directly. The charity to be established will also be used for people who have health problems and need financial support. The money belongs to the people and if the donators want their money back, of course, it will be given back.”

The chair of the Cyprus Islamic Association, Hüseyin Hoca, took part in the live broadcast for the aid campaign for Karel baby on June 28. Speaking to the Londra Gazete, Hüseyin Hoca made the following statement:  “I took part in the live broadcast program organized to collect aid on June 28, as the Cyprus Islamic Association, we donated £ 500 to the bank account of the Limassol Association UK. Baby Asya’s aunt is my close friend and we are in constant contact, I made a separate donation for Asya personally. Later, I left the aid committee for Karel baby, so I am not aware of the latest circumstances.”