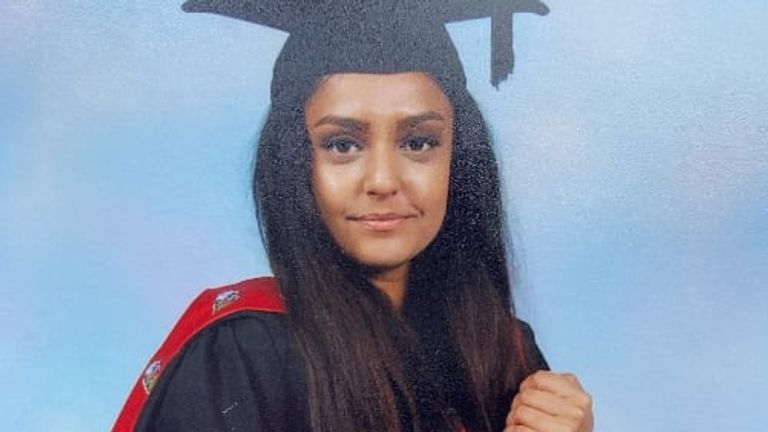 A man is being questioned on suspicion of murdering primary school teacher Sabina Nessa, who was found dead in a south-east London park.

The 28-year-old was discovered in Cator Park in Kidbrooke by a member of the public on Saturday 18 September.

Police believe she was attacked shortly after leaving her home in nearby Astell Road at about 20:30 BST the previous evening.

Officers have released an image of another man they wish to speak to.

He is shown on CCTV walking through Pegler Square, where a vigil, organised by a Kidbrooke community group, is to be held for Ms Nessa later. Police said they would be part of the gathering.

Police said a post-mortem examination carried out on Monday was inconclusive.

Another man in his 40s who was held on suspicion of murder on Sunday was later released under further investigation.

Nessa was attacked as she walked to meet a friend at The Depot bar, a journey that police said “should have taken just over five minutes”.

Her body was found the next day near a walkway in the park.

Speaking about the CCTV image appeal, Det Ch Insp Neil John said: “We would ask anyone – especially those in Kidbrooke and the wider area of Lewisham and Greenwich – to take a careful look at these images to check whether you know who this man is or have seen him over recent days.

“Any information as to his identity or whereabouts could be vital for our investigation so we are asking you to share this image far and wide to ensure as many people as possible see it.”

The family of Ms Nessa, who was originally from Sandy in Bedfordshire, previously said they had been left “devastated” by her killing.

Her cousin, Zubel Ahmed, described the 28-year-old as the “kindest, sweetest girl you could meet”.

He said: “Sabina’s heart was as good as gold, she never had a bad word to say about anyone. Her sister is going to miss her so much.”

Ms Nessa was a teacher at Rushey Green primary school in Catford.

The head, Lisa Williams, called her “a brilliant teacher; she was kind, caring and absolutely dedicated to her pupils”.