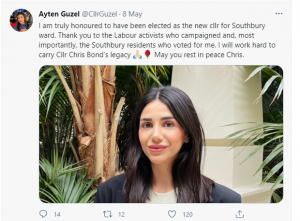 Justin Halabi, 23-years-old and the new Conservative councillor for Hatch Lane ward in Waltham Forest. The former councillor for the ward for 26-years Geoff Walker passed away last March.

Halabi said: “To all of those who voted against overdevelopment, voted Conservative, and voted for Justin Halabi – I appreciate it more than I can describe. Together, we will make a difference in Chingford and Highams Park.”

The son of two Conservative Waltham Forest councillors Ilkay Isa and Halil Nick Halebi Halabi,  who famously has had the Prime Minister round for Turkish coffee, Halabi is no stranger to politics. 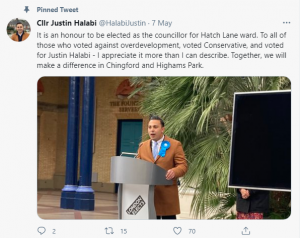