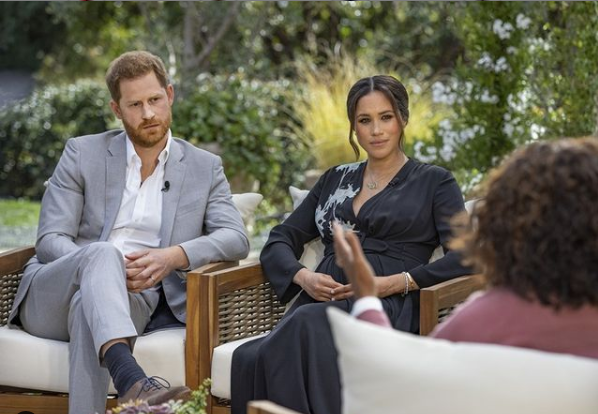 Meghan Markle has said she found life within the British Royal Family so difficult that at times she “didn’t want to be alive any more”.

In TV interview with Oprah Winfrey, the duchess said she did not get help when she asked for it.

She said a low point was when Harry was asked by an unnamed family member “how dark” their son Archie’s skin might be.

Prince Harry also revealed that his father, Prince Charles, stopped taking his calls when he wanted to step back.

The highly-anticipated interview with Oprah, which the couple were not paid for, aired overnight in the US in a two-hour CBS special.

Tonight at 9 pm (UK time) the special will be aired on ITV, as well as worldwide.

The couple moved to California after formally stepping down from royal duties in March 2020, and it was announced last month that they would not be returning as working members of the Royal Family.

Asked by Oprah if she was thinking of self-harm and having suicidal thoughts at some stage, Meghan replied: “Yes. This was very, very clear. Very clear and very scary. I didn’t know who to turn to in that.”

Meghan said that she felt “haunted” by a photograph from an official event she attended with Harry at the Royal Albert Hall while she was pregnant.

“Right before we had to leave for that (event), I had just had that conversation with Harry that morning,” Meghan said.

Winfrey asked: “That you don’t want to be alive any more?”

She said that she attended the event with Harry that night because she felt she could not be “left alone” and recalled Harry gripping her hand tightly while in attendance at the Royal Albert Hall.

Harry said that he feels “really let down” by his father. He added that he will always love him, but “there’s a lot of hurt that’s happened”.

Harry also revealed that his family had cut him off financially at the beginning of last year, after the couple announced their intention to step back as senior royals.

He said deals with Netflix and Spotify were “never part of the plan” but they needed them to pay for security staff.

Woman charged with murder of Tai Jordan O’Donnell in Croydon