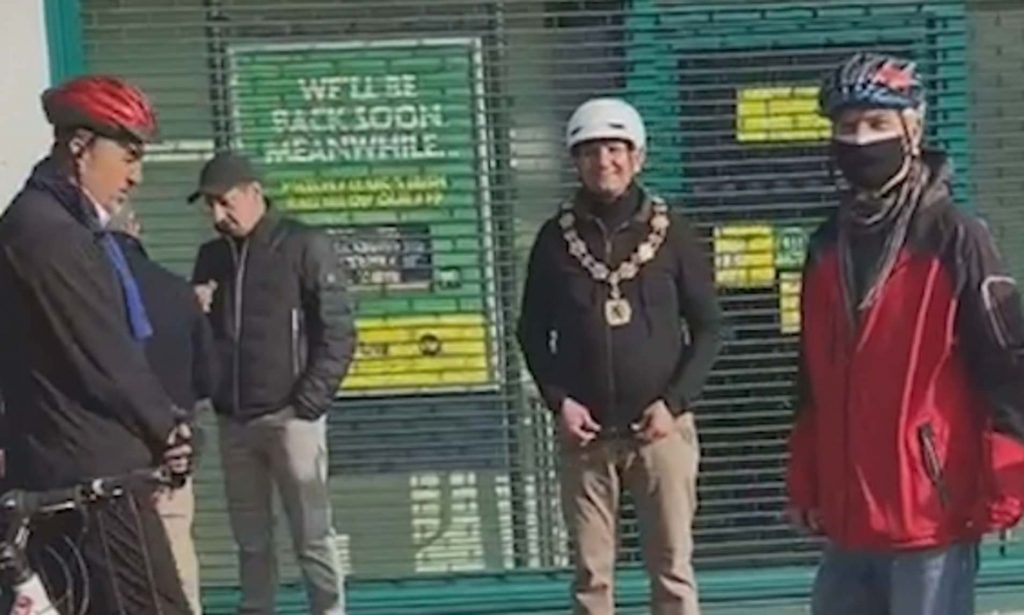 Many Enfield residences have been outraged after a video shared across social media on Sunday accusing the Mayor of Enfield Cllr Sabri Ozaydin, Cllr Ahmet Hasan and Cllr Mustafa Cetinkaya of breaking coronavirus lockdown rules, as they stopped outside of a coffee shop during a bike ride.

The video which was shared on the ‘Spotted Enfield’ Facebook page has been view nearly 30,000 times in less than 2 days, with hundreds of comments from local residents expressing their anger towards the councillors and Mayor who was quickly recognised for wearing his office chains. 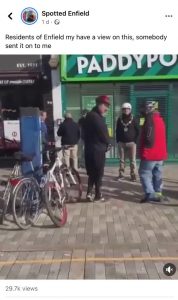 The news of the trios ride has also been picked up by the national press and shared on the Daily Mail.

Ozaydin, Hasan, Cetinkaya as well as another unidentified man which is believed to be Ozaybin assistant in the video were seen standing outside Costa Coffee on Sunday 28 February, the three councillors were standing together with Ozaybin and Cetinkaya seen to be maskless while talking.

When made aware of the man that was videoing, the councillors can be seen to immediately step away from each other and creating a large social distance with Cetinkaya lifting his face mask back over this face.

When challenged by passers-by who said ‘So what are you doing out with a group of people?’

Ozaydin, replied: ‘We are just cycling.’

The man said: ‘But you’re not allowed to. We’re in a lockdown. You’re only meant to be meeting one other person outside your family house and you’re out with a group of cyclists.’

The mayor said ‘we are testing the roads’ as he pulled a blue surgical mask over his nose and mouth.

The unidentified man with the three councillors then said: ‘We’re actually attempting to find out what is wrong with the cycle lanes.’

The man filming said: ‘In lockdown. Do you all live together? You’ve all come from separate households. There’s a pandemic on. Mayor of Enfield, with his mates, out for a bike ride. Lovely.’

Under the current coronavirus rules, socializing and exercising with multiple members of other households is prohibited.

If anyone is found breaking the rules they could be fine by the police.

The images he shared seems to show the three setting out from the Civic Centre for a bike ride around Enfield. 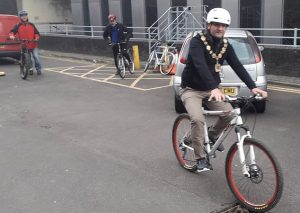 Some comments made under his tweet and the video shared on Spotted Enfield have called for them to resign.

Others expressing their frustration toward the men and accusing them of breaking the rules, one person said “Seriously!!!!

There is People sitting indoors protecting each other! Family! Friends! from the virus & they are out socialising…. & it’s The mayor of Enfield!…”
A few comments were made that the Mayor and colleagues were working and looking at bicycle lane, which has been heavy criticised since they were installed across the borough.

According to the Daily Mail Nicola Hume, whom they have said is the daughter of Cllr Ozaydin’s assistant, wrote: ‘The assumption was that he’s just out with friends when he isn’t. He’s with colleagues.

‘The guy filming has jumped the gun. He’s wearing his mayoral livery collar which shows he’s working. They took some social media pics of him doing some exercise and stopped outside a Costa…’