Shacklewell Lane Mosque and UK Turkish Islamic Trust President Erkin Güney stated that the hospital capacities in England are not enough for their patients and the morgues are full, as there is a serious delay in the funeral procedures.

In England, the country where the mutated strain of coronavirus was first announced, the highest daily loss of life and number of cases continued since April, while the coronavirus pandemic continues to claim our community members.

Speaking to Londra Gazete, Güney said that when there was no room left in London’s morgues and that container morgues have been placed at Shacklewell Lane, England’s first Turkish mosque. 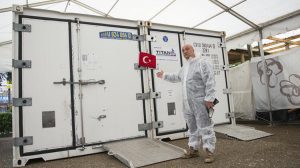 Located in the Hackney, the mosques has been working with Hackney Council and container morgues with a capacity of approximately 50 were placed on the grounds. Güney said:

‘‘The highly contagious and deadly new strain of coronavirus continues to spread throughout the country, with hospital and morgue capacities seriously overrun. In such a difficult time, we are trying to do our best as Shacklewell Lane Mosque and UK Turkish Islamic Trust. We have taken steps to relieve the Hackney Council’s burden by collaborating with them. Currently, there are two large morgue containers at our mosque, and there is an extraordinary blockage in funeral procedures due to the pandemic. In this way, at least the bodies of our community members can be kept in our mosque.

“The contagious and lethal new strain showed its effect especially after Christmas, over 40 Turkish Cypriots lost their lives since December 25. For the past week, we have been receiving news of the death of 4 to 6 people everyday, waking up with tears in the morning, and falling asleep with tears in the evening. There is great suffering here. Due to the increasing number of deaths, there are disruptions in funeral procedures. Many funerals are waiting to be sent off on their last journey, the paperwork processing is very slow and cemeteries are disrupted…” 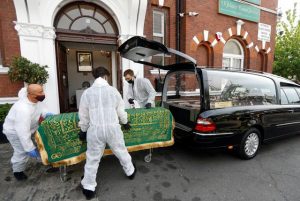 Deaths in the community keep increasing

Coronavirus losses in our community continue to grow, which started after the death of Turkish Cypriot Ahmet Raşit on March 15 2020, and have rapidly increased again due to the mutated strain of the virus.

The known number of those who have passed away has passed 200.

The number of known Turkish Cypriots is 143 and the known number of deaths of people originated from Turkey has reached 50.

Based on the lastest informatıon shared to Londra Gazete over the weekend 17 more people have passed away from the Turkish Speaking Comunity.