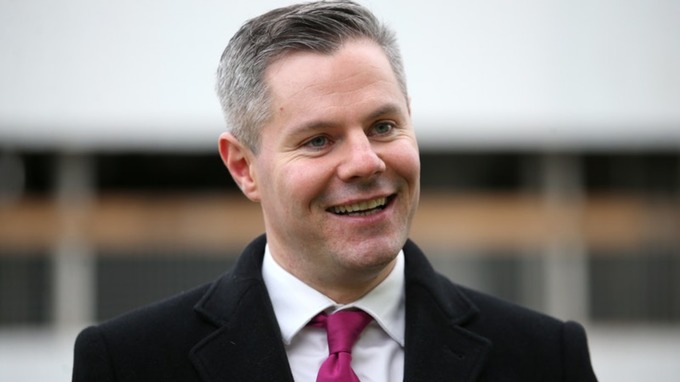 Scotland’s finance secretary has quit hours before delivering his budget amid reports that he messaged a 16-year-old boy on social media.

The Scottish Sun said that Derek Mackay contacted the boy over a six-month period, and told him that he was “cute”.

Mr Mackay said he had “behaved foolishly” and took full responsibility for his actions.

He also apologised “unreservedly” to the boy and his family.

First Minister Nicola Sturgeon said she did not know about Mr Mackay’s “unacceptable” behaviour until Wednesday evening, and is “not aware of any further allegations” against him.

In a statement to the Scottish Parliament, she confirmed that he has been suspended by the SNP while further investigations are carried out.

Scottish Conservative leader Jackson Carlaw called on Mr Mackay to also stand down from the Scottish Parliament, saying his behaviour could “constitute the grooming of a young individual”

And Scottish Labour leader Richard Leonard said Mr Mackay’s actions had been “an abuse of power” and “nothing short of predatory”.

The newspaper detailed allegations that the 42-year-old politician contacted the boy “out of the blue” in August of last year and sent about 270 messages on Instagram and through Facebook.

It has published a list of messages – the most recent of which is from earlier this week – involving Mr Mackay and the boy, in which its says the MSP invited him to dinner and to attend a rugby event.

The newspaper also reported that Mr Mackay contacted the boy several times on Christmas Day, and told him on another occasion that he was “looking good with that new haircut”.

In one of the exchanges, Mr Mackay is said to have told the teenager he was “cute”. In another the boy confirmed he was 16 and tells Mr Mackay “not to try anything”.