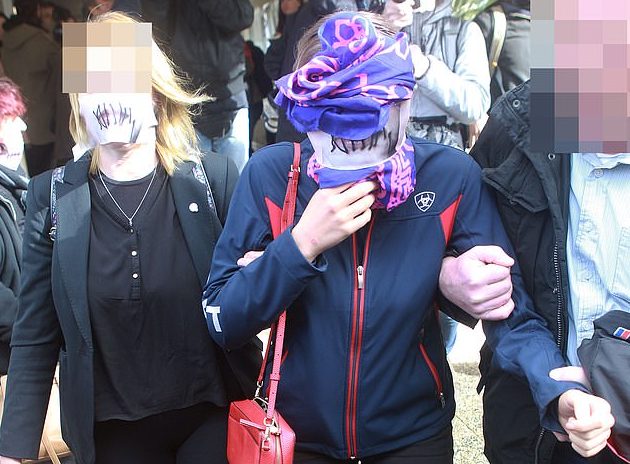 A 19-year-old British woman has been found guilty of lying about being gang-raped by Israeli youths in Ayia Napa, Cyprus.

She had been arrested after withdrawing an allegation that she was attacked by 12 young Israelis in a hotel in July.

The woman had said Cypriot police made her falsely confess to lying about the incident – but the police denied this.

She was found guilty on a charge of causing public mischief, at a court in Paralimni.

The judge at the Famagusta District Court adjourned sentencing until 7 January. She could face up to a year in jail and a £1,500 fine, but her lawyers have asked for a suspended sentence.

Lawyer Michael Polak, director of Justice Abroad which is assisting the woman, told BBC News that “there were a number of bases for appealing the decision”.

He said those reasons included the court relying on a retraction statement which was given when no lawyer was present, which he said was a breach of European human rights law.

He also criticised the handling of the case by Judge Michalis Papathanasiou, who he said refused to hear any evidence about whether the alleged rape took place.

Prosecutors said the woman willingly wrote and signed a statement retracting her claims 10 days after making the initial allegations.

The woman told the court this happened under duress with the threat of arrest and that she had been denied access to a lawyer.

The trial began at the start of October – with the verdict delayed until now.

As he delivered the verdict, Judge Papathanasiou said: “The defendant gave police a false rape claim, while having full knowledge that this was a lie.

“During her testimony, the defendant did not make a good impression, she did not tell the truth, and tried to mislead the court.”

He added “there was no rape or violence” and police had thoroughly investigated, “making all necessary arrests.”

The judge said his decision was backed up by video evidence showing her having consensual sex.

“The reason why she initially gave false statements was because she realised that she was being recorded while she was having sexual intercourse and so she was placed in a difficult position and felt embarrassed.

“She then apologised saying she had made a mistake by filing a false statement.”

Her lawyers had argued that the video found on some of the Israelis’ phones showed her having consensual sex with one of the group while others tried to enter the room as she told them to leave.

One of the woman’s lawyers, Nicoletta Charalambidou, told reporters outside court that they were planning to appeal against the decision to Cyprus’ Supreme Court, and if that failed they would take the case to the European Court of Human Rights.

“The decision of the court is respected,” she said. “However, we respectfully disagree with it.

“We believe there have been many violations of the procedure and the rights of a fair trial of our client have been violated.”

Following the verdict, the woman was heard saying to one of her lawyers “I thought you were asking for a fine”, after Ritsa Pekri asked the judge to impose a suspended sentence.

Photographers and camera operators were waiting as the teenager left court with her mother. 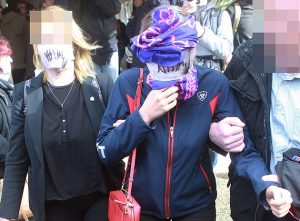 Both women wore white scarves around their faces depicting lips sewn together – brought by protesters from the Network Against Violence Against Women, who filled the court and demonstrated outside.

Argentoula Ioannou, a protester from the organisation, said: “I think the verdict was wrong because it was decided on the wrong basis.

“That is why the judge demanded in the process of the trial that he didn’t want to hear anything of the rape.

“So the allegations of the girl were completely excluded from this trial.”

Twelve men were arrested in connection with the allegations but were later released and returned home.

Nir Yaslovitzh, a lawyer representing some of the Israelis arrested over the alleged rape, welcomed the verdict.

“I applaud the court’s decision to convict the girl,” he said.

“I hope the court will find it appropriate to aggravate the punishment imposed on the girl, who refuses to this day to take responsibility for the horrible act she’s done against the boys.”

The British woman spent more than a month in prison before she was granted bail at the end of August, but had not been allowed to leave the island.

A Foreign Office spokesman said: “The UK is seriously concerned about the fair trial guarantees in this deeply distressing case and we will be raising the issue with the Cypriot authorities.”