Man stabbed in the head outside the Home Office 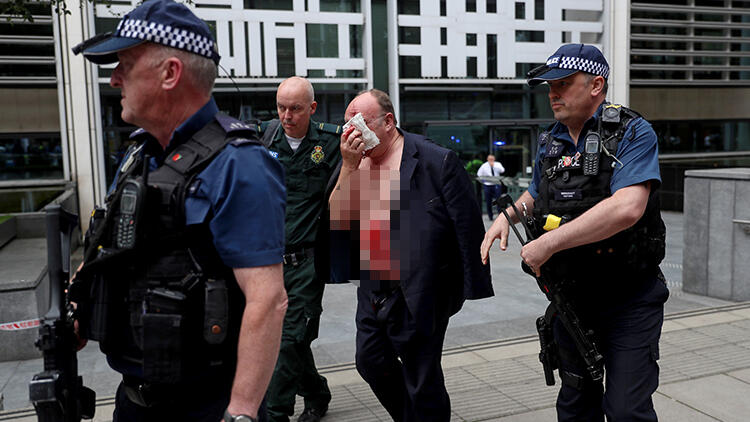 A man was arrested on suspicion of GBH after a stabbing in the street outside the Home Office in London.

The victim, in his 60s, was pictured holding a dressing to his face after being slashed in an attack outside the home office building on Marsham Street, Westminster, on Thursday afternoon.

The victim staggered into the Home Office reception looking for help after being stabbed in the street, a source said.

Onlookers told how the man had “lots of blood down his front” and was led away by paramedics before being taken to a major trauma centre.

Police also cordoned off a bag outside St John’s in Smith Square, where the suspect, 29, was arrested on suspicion of GBH and possession of CS spray.

The building was put on lockdown after the incident, with civil servants told to stay inside but to “be vigilant” if they need to leave.

Home Secretary Priti Patel tweeted: “All my thoughts are with the victim and their family following horrific unprovoked knife attack on Marsham Street.”

he Metropolitan Police said: “Police were called at 13:06hrs on Thursday, 15 August to Marsham Street, SW1 following a report of a man with a knife at the location.

“Officers attended to find one man with knife injuries.

“London Ambulance Service attended the address where they are with the injured party.

“The injuries are currently being treated as life threatening.

“One man has been arrested on suspicion of grievous bodily harm and taken to a police station.

“Enquiries are ongoing into the exact circumstances of the incident.”

A Home Office spokesperson said: “The Metropolitan Police is investigating a knife attack which took place outside the Home Office this afternoon. The victim is receiving medical care. This is a deeply concerning incident and our thoughts are with him and his family.

“As this is an ongoing investigation it would be inappropriate to comment further.”