Apple to pay £137m in backdated taxes to HMRC

APPLE Europe, which handles the tech firm’s UK marketing has agreed the extra taxes after HMRC carried out “extensive audit” by its operations in the UK. 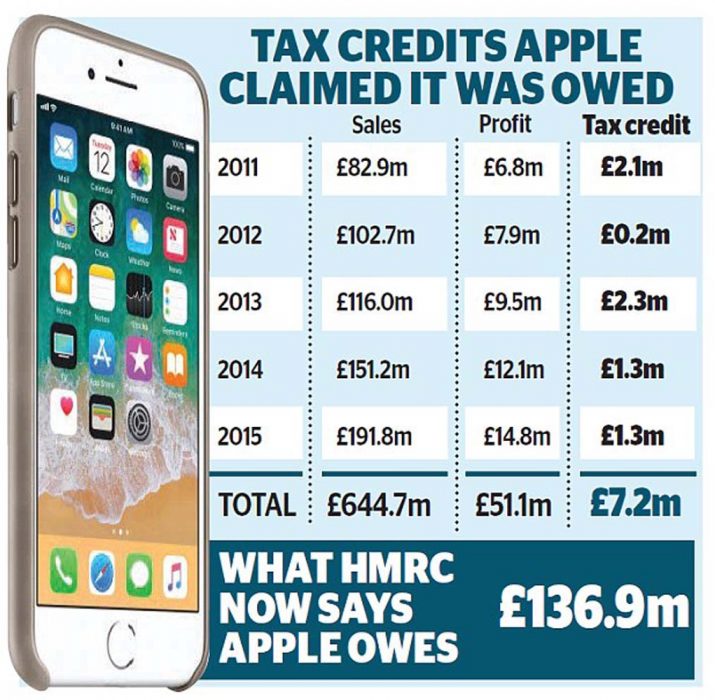 APPLE Europe, which handles the tech firm’s UK marketing has agreed the extra taxes after HMRC carried out “extensive audit” by its operations in the UK.

£137 million which includes interested is for paid taxes a “corporate income tax adjustment”, will cover the backdated years up until September 2015. They also noted its income tax “will increase going forward”.

The filing, at Companies House, said: “This payment of additional tax and interest reflects the company’s increased activity and is recognised in the current financial period which ended on 1 April 2017.”As a result of this adjustment the Company’s corporate income tax payments will increase going forward.”

Commenting on the payment, the Apple have said: “We are proud that Apple is an engine of economic growth in the UK through the fast-growing iOS App Economy and our own expanding workforce, which will be housed in a new campus at the Battersea Power Station.

“Apple pays all that we owe according to tax laws and local customs in the countries where we operate.

“As a multinational business and the largest taxpayer in the world, Apple is regularly audited by tax authorities around the world.

An HMRC spokesperson told Sky News: “We do not comment on the tax affairs of individual companies. Multinational companies must pay all taxes due and we don’t settle for less.

“Last year alone, HMRC secured and protected over £8bn in additional tax revenue from the largest and most complex businesses.”