Shots fired in security alert at US Suffolk airbase

A man has been arrested after driving through a military checkpoint, getting close to an aircraft at a base in Suffolk used by the US Air Force. 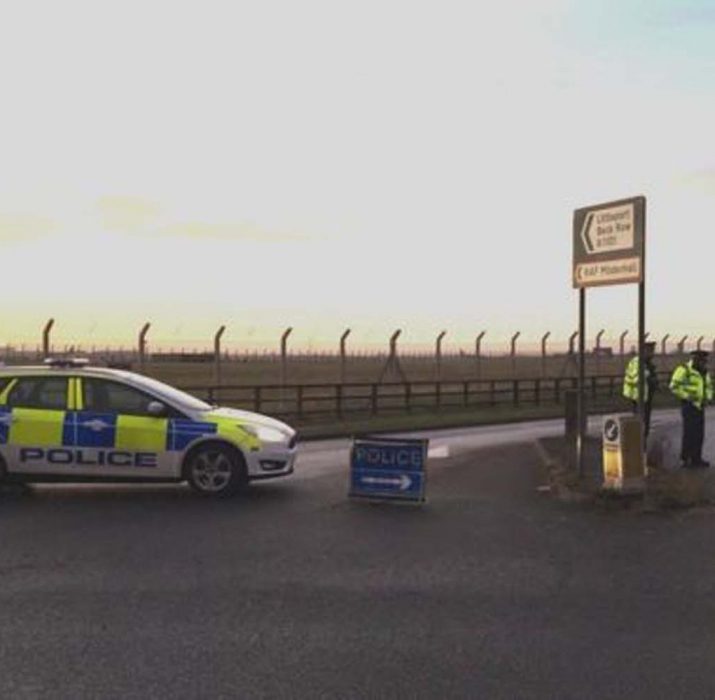 A man has been arrested after driving through a military checkpoint, getting close to an aircraft at a base in Suffolk used by the US Air Force.

Shots were fired by US personnel before the 44-year-old British man was overcome by staff at RAF Mildenhall.

The base was temporarily put into lockdown as Suffolk police responded to reports of what they called a “significant incident”.

Police said the incident was being treated as trespass, not terrorism.

Supt Kim Warner, from Suffolk Police, said the man, who suffered cuts and bruises, was arrested after a “short pursuit” and his vehicle was stopped by US security services.

There was “no obvious motive at this stage”, he said, adding there was no wider threat to the public or the base and police were not looking for anyone else.

The vehicle was brought to a halt close to a US plane, an Osprey, and it was not thought there was “any significant damage” to the vehicle or the aircraft, Supt Warner said.

Suffolk Police was notified about a breach of security at about 13:40 GMT.

“It would be fair to say some of the minor injuries were probably as a result of him being apprehended,” he added.

The superintendent said there would now be an internal investigation by the US airbase into why guns were discharged.

RAF Mildenhall is protected by Ministry of Defence police and US armed guards.

The US Air Force said in a statement it was continuing to work with local authorities.

The base is used as a transport hub by the US and is home to a fleet of refuelling aircraft and special operations forces.

The base was one of 56 MoD sites earmarked for closure.

However, the US Air Force said in September it was delaying plans to relocate its operations to a base in Germany until 2024.

RAF Mildenhall has previously been a potential target for a terror attack against US military personnel.

In May 2016, Junead Khan was given a life sentence for preparing terrorist acts after a court heard how he used his job as a delivery driver to gather information about the base. (BBCNEWS)