ATATÜRK was remembered by the Londoners on different occasions on the 79th anniversary of his death. 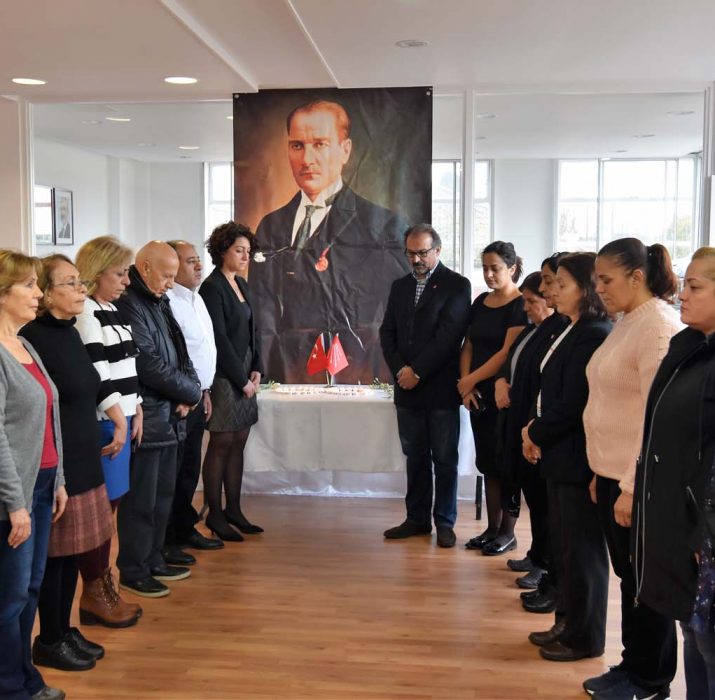 ATATÜRK was remembered by the Londoners on different occasions on the 79th anniversary of his death.

The first memorial event took place in the morning of 10 November in CHP England headquarters. Citizens came together to commemorate Atatürk at 9am with 5 young people read the National Anthem after a minute of silence. CHP President Hasan Dikme, made a statement that at a bust Ataturk will be built in England will build.

“We came together to commemorate the 79th year of Atatürk’s eternal farewell. Wherever we are in the world, we will always continue to do it everywhere. One of the most important things we want to do for England is that to have a bust of Atatürk. We will do something about it, we will make an attempt. We will make every effort to do this in Central London. We will make such an attempt to visit an important Ataturk statue or such a sculpture on such important occasions and to find, understand and remember in the presence of our Atatürk. We will take the necessary steps for this as soon as possible. Understanding Atatürk does not end only when the sculptures are planted in a place and something is said superficially. ”

AKP SEE ATATÜRK  AS A SOLUTION

At the end of his speech, Dikme, referring to the views of Turkish President Recep Tayyip Erdogan in recent periods of Ataturk, said, “You know there is a serious preparation for 2019. In recent days, especially by the AKP, there are hidden secrets, AKP’s efforts to use Atatürk and Atatürk’s efforts. They want to collect people from major cities and take them to Ankara and Anıtkabir by bus. Gönül wanted to know that these structures could be taken from Beşiktaş, not Sisli, but from Sultangazi or Bağcılar, but we could believe it in sincerity and seriousness. But there is a fact that Atatürk, who is a very great value, annihilates all the assets of the Republic by AKP they want to finish the republic and Ataturk, but they are they are so squeezed in the point that even they see Atatürk as a solution ”

OUR HOMEWORK IS ATATÜRK

The memorial events in London were organized by the second British Atatürk’s Thought Association (IADD). The traditional “Commemoration and Understanding of Ataturk on November 10th” took place in the centre of Shoreditch with a wide participation. It started with the film of “Dersimiz Atatürk” (Our lesson Atatürk), adapted from the book “Şu Çılgın Türkler” (The Crazy Turks) by Turgut Özakman. Atatürk’s life was animated and his emotional moments lived in front of his eyes, while Atatürk’s artwork was adorned with anecdotes conveying the best of human, motherland, art, children, nature love and spiritual richness. At the meeting, saw the attention of primary school students and parents, university youths and Atatürkists from Brighton and Birmingham, as well as representatives of many members and sister associations. After the fılm then made a silent stance and read the National Anthem of the participants, IADD President Jale Ozer spoke. Following the opening speech, IADD Science Board Chairman Prof.Dr.Belma Ötüş Baskett and IADD Science Board Member Dr. Enis followed the talk of User.

TODAY IS THE DAY TO BE TOGETHER
IADD President Jale Ozer said in her opening speech, “We should be able to tell that the Atatürks living abroad, the contemporary, secular Turkish Republic founded by Atatürk, the peace in the country, the peace principle in the world is necessary not only for Turkey but also for world peace. In the coming critical period, we are calling all the patriots to unite and organize on the road that Atatürk’s principles and thoughts show. The day is the day of unification and the conquest of my motherland. ”

Prof. Dr. Belma Ötüş Baskett conveyed his observations on the visit to the monastery idol, the first step of Ataturk’s military life, given his photographs in the film, and stated that one quarter of the building, which is now being organized as a Macedonian Museum, is kept very well as Atatürk Museum.Dr. Enis Üser made statements about Atatürk’s analysis of the concepts underlying the world of thought, its origins. Dr. Üser shared in this frame Atatürk’s propositions about religion and the historical, sociological and political dimensions behind the idea of ​​the six arrows.The activity ended with Atatürk’s favorite dish, meatless dry beans and rice.

BOOKS AND ATATÜRK
The third and last day of Atatürk’s commemoration activities was organized by Çanakkale Commemoration Platform (ÇAP). Dr. Haldun Solmaztürk participated in the commemoration program as a speaker “In the 90th year, the speech and books of Atatürk ” were held. The intensive attendance was hosted by the programme Troy Hotel. After the silence and the reading of the Turkish National Anthem, ÇAP President Servet Hassan started with the opening speech and greeting guests. After Hassan’s speech, the programa invited bureaucrats from the KKTC London Representative Zehra Başaran to speak. Zehra Başaran made a speech expressing his unanimous respect in the 79th year when we were deeply saddened to lose Atatürk. After Başaran’s speech, he joined as the speaker of the night. Haldun Solmaztürk took the word. Retired Brigadier General Dr. Haldun Solmaztürk made a speech about Ataturk’s speech and other books. He picked up the nütuk’te and 19 May 1919’da Atatürk’ın starting from Samsun on March 3, Solmaztürk listened to the pleasure of the participants. He also talked about other books bearing Ataturk’s signature. Solmaztürk underlined that Ataturk was a good reader before a good writer.

After seeing that Turkey will pass an unbearable rise after 3-5 years, Solmaztürk, the next generation has also found advice. The retired general explained that for the eternity of the Republic of Turkey, young people should read more, be hardworking and give importance to positive stamina and fine arts.