Theresa May to meet Donald Tusk for talks

Theresa May will meet European Council President Donald Tusk later – the first time since the PM set out plans for a two-year transition period post-Brexit. 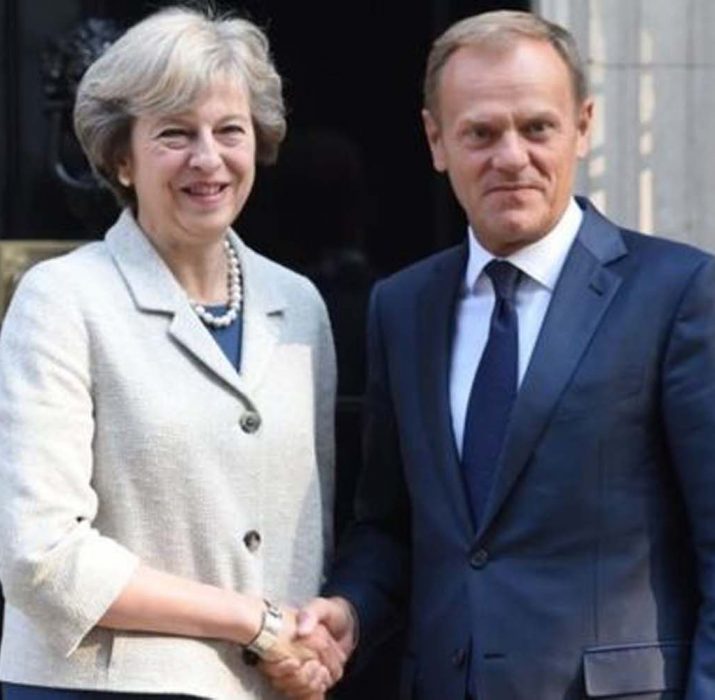 Theresa May will meet European Council President Donald Tusk later – the first time since the PM set out plans for a two-year transition period post-Brexit.

It comes a month before the council will decide whether sufficient progress has been made to begin trade talks.

The council says it first wants more detail on citizen’s rights, a financial settlement and the Irish border.

The meeting at Downing Street will be held in parallel with the fourth round of Brexit talks in Brussels.

The new round of negotiations is the first chance for the EU team to respond to Mrs May’s speech in Italy last week, in which she said the UK wanted a two-year transition period and would honour its financial obligations.

Brexit Secretary David Davis said that Mrs May had shown “leadership and flexibility” in her Florence speech and given reassurances on financial issues.

There were “no excuses for standing in the way of progress”, he insisted.

At the start of negotiations on Monday, the EU’s Brexit negotiator Michel Barnier called for a “moment of clarity” from the UK.

Speaking in Brussels, Mr Barnier said he was “keen and eager” for the UK to translate the “constructive” sentiments in Mrs May’s speech into firm negotiating positions on issues such as citizens’ rights, the Irish border and financial issues, including the UK’s so-called divorce bill.

Remarking that it had been six months since the UK triggered Article 50, he said progress on these three fronts was essential to allow talks to move on to the future of the bilateral trade relationship, as the UK would like.

“We are six months into the process,” he said. “We are getting closer to the UK’s withdrawal. I think this moment should be a moment of clarity.”

In her speech on Friday, Mrs May offered to continue paying into the EU for a two-year transition after the UK leaves in 2019 to ensure the bloc is not left with a budget black hole.

The prime minister sought to reassure member states that they would not lose out financially during the current EU budget period, which runs until 2020.

She also confirmed there would be no restrictions on EU citizens coming to the UK during the transition period, but after Brexit they would be registered as they arrived. (BBCNEWS)