Internationally acclaimed Turkish journalist and author Ece Temelkuran, met with her London based readers through a special book reading event in conjunction with Waterstones Trafalgar Square, introducing her recent book “Women Who Blow on Knots”. 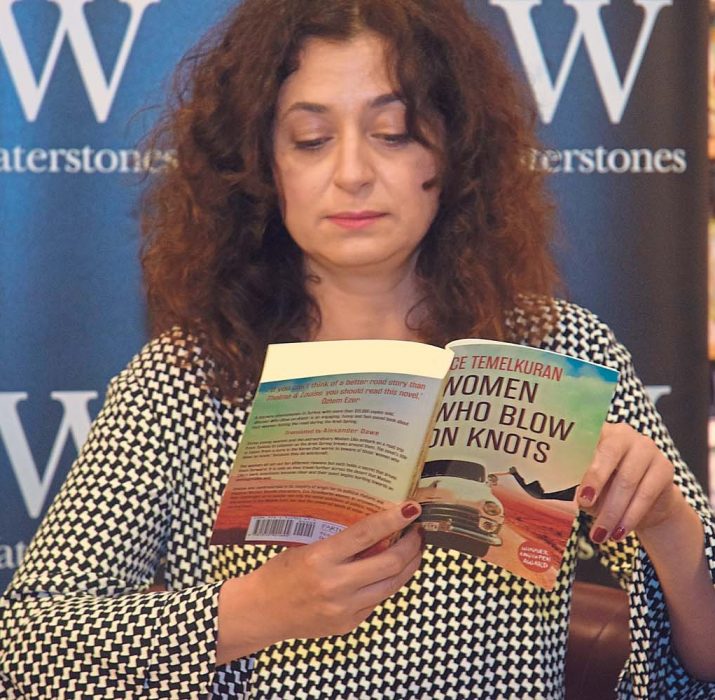 Internationally acclaimed Turkish journalist and author Ece Temelkuran, met with her London based readers through a special book reading event in conjunction with Waterstones Trafalgar Square, introducing her recent book “Women Who Blow on Knots”.

A phenomenon in Turkey with more than 120,000 copies sold, Women who Blow on Knots chronicles a voyage reaching from Tunisia to Lebanon, taken by three young women and septuagenarian Madam Lilla. Although the three young women embark on the road for different reasons – for each holds a dark secret – it is only at the journey’s point of no return that Lilla’s own murderous motivations for the trip become clear.

Unique and controversial in its country of origin for its political rhetoric and strong, atypically Muslim female characters, Temelkuran weaves an empowering tale that challenges us to ponder not only the social questions of politics, religion and women in the Middle East, but also the universal bonds of sister- and motherhood. Ultimately, the novel begs the reader to mediate on the greatest problem women face today.

WRITING FICTION AS A JOURNALIST

Talking about the book, Temelkuran explained the reasons why she chose to write fiction, by mystifying the fact that in reality, the plot was taken from her own experiences back when she was in Tunisia and yet she felt like expressing a story in which she did dwell.

“I loved being the narrator of this book but I can’t really say what the fiction is and what is not in this book – as a journalist I just enjoyed the process of writing fiction but also writing about my stories.”

Answering the questions of the audience, Miss Temelkuran then signed copies of her new book by also taking questions and comments in person.

Ece Temelkuran (born 22 July 1973, Izmir) is a Turkish journalist and author. She was a columnist for Milliyet (2000–2009) and Habertürk (2009 – January 2012), and a presenter on Habertürk TV (2010–2011).[1] She was fired from Habertürk after writing articles critical of the government, especially its handling of the December 2011 Uludere massacre. She was twice named Turkey’s “most read political columnist”. Her columns have also been published in international media such as The Guardian and Le Monde Diplomatique.

A graduate of Ankara University’s Faculty of Law, she has published 12 books, including two published in English (Deep Mountain, Across the Turkish-Armenian Divide, Verso 2010, and Book of the Edge, BOA Editions 2010). In 2008 she was a visiting fellow at the Reuters Institute for the Study of Journalism, during which time she wrote Deep Mountain, Across the Turkish-Armenian Divide. Her books include Ne Anlatayım Ben Sana! (“What am I Going to Tell You!”, Everest, 2006), on hunger strikes by Turkish political prisoners. She was awarded the Human Rights Association of Turkey’s Ayşe Zarakolu Freedom of Thought Award in 2008.