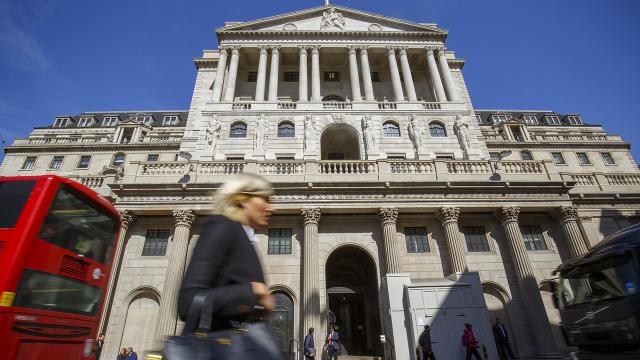 It said that it expected gross domestic product (GDP) – which is a measure of all the goods and services produced by the UK – to have shrunk by 0.1% between July and September, otherwise known as the third quarter.

A recession is defined as two consecutive quarters – or two three-month periods – of shrinking GDP.

UK output shrank by 0.1% in the second quarter of the year. The Bank of England had previously forecast that GDP would grow between July and September before beginning to slow down in the final three months of the year. But it now expects the economy has contracted sooner.

UK interest rates have increased to 2.25% – the seventh time in a row the Bank of England has raised rates in an attempt to tame rising prices.

The rate has been lifted by half a percentage point from 1.75% and takes borrowing costs to their highest levels since 2008 during the global financial crisis.

Interest rates have been rising since last December as inflation has swelled to its worst level in four decades.

In its minutes outlining today’s interest rates rise, the Bank’s Monetary Policy committee says CPI (Consumer Price Index) inflation is expected to rise by less than predicted in August in the near term because of the government’s energy price guarantee.

It forecasts that inflation will peak at just under 11% in October, having previously predicted it would surpass 13%. That earlier forecast had been lower than many commercial banks, with some predicting inflation could top 20%.

The Bank adds: “Nevertheless, energy bills will still go up and, combined with the indirect effects of higher energy costs, inflation is expected to remain above 10% over the following few months, before starting to fall back.”

The pound fell 0.7% against the US dollar following the Bank of England’s announcement.

The pound is still higher, however, than it was earlier in the day, when it reached a 37-year low.