Migrant’s from Turkey took part in the Jazz Festival 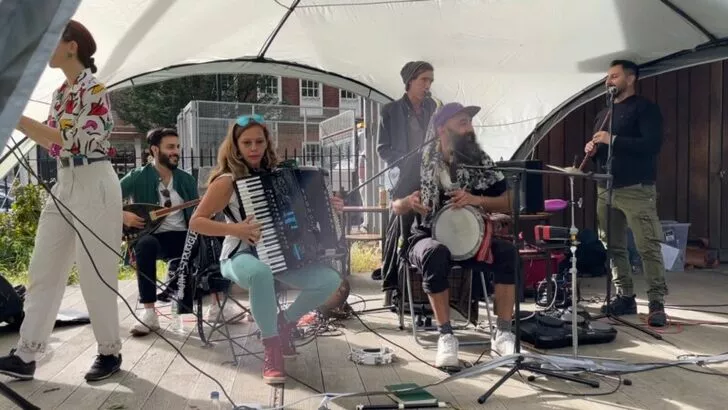 A jazz festival was held in Newington Green over the past weekend, the annual event was put on hold last year due to the pandemic but this year has seen the local residents, as well as jazz enthusiasts, join together.

Taking part in the festival was a music group made up of migrants from Turkey taking to the stage performing flavours of Anatolian music.

As well the music of Anatolian the flavours were also available at the festival with stands from different ethnic communities; Stuffed peppers, stuffed leaves, tandoori pastry, and vicious flavours.

Nezahat Cihan, who has lived in England for more than thirty years, said that this is a women’s movement and that they aim to bring women in need into social life by making them a profession.

When one of the members of the music group caught Covid-19 and could not come, Cabbar Boziye, who urgently called two other musicians who had not even rehearsed before, stopped even the British to dance with the rhythms he played. The British, who came together in the park of the neighbourhood, had fun for the first time in 18 months without being subject to quarantine rules.

Bülent Demirci played kaval and Anıl Duman played baglama in the orchestra, which excited the crowd with samples from Anatolian and Balkan music. Bülent Demirci said that he made a living by running a supermarket with his brother in England, where he settled 28 years ago, and said that he satisfied his spiritual hunger by playing the flute.

Anıl Duman, explained that he was born in Ankara, said that he has lived in London for 15 years, that he learned to play the baglama, which he learned from his uncle, and that he improved it by studying music at Northampton University and now he continues his development by taking part in the festivals of the ensembles in London.

The festival also saw the likes of local politicians take part, with Jeremy Corbyn, the former Labour leader making a donation in support for the local community, raffling off his homemade jams, which made £60.