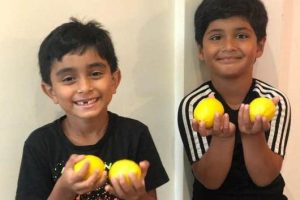 Two six-year-old friends whose lemonade stand has raised thousands for the crisis in Yemen were stunned to receive a donation from Hollywood star Angelina Jolie.

Ayaan Moosa and Mikaeel Ishaaq set up “Lemonade for Yemen-Aid” selling fresh drink and cupcakes from a street stall outside Ayaan’s family home in Redbridge.

The best friends initially hoped to raise £100 to help children in the nation, riven by civil war and Covid-19 and now facing famine.

But their venture made headlines around the world after being featured in a local newspaper, and they have so far raised more than £15,000.

Mother-of-six Jolie, who has been a UN special envoy since 2012, got in touch after hearing about the appeal and sent a signed note along with a “generous” donation.

Jolie wrote: “Thank you for what you and your friends are doing to help children in Yemen. I am sorry I am not able to buy a lemonade but I’d still like to make a donation to your stand. Love, Angelina” 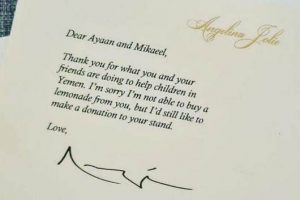 Ayaan’s mother Adeela Moosa said the Hollywood star’s note was “lovely” — adding she made “a very generous donation”. She said that the children initially did not know who Ms Jolie was although “their dads were very excited”.

They realised who the Tomb Raider and Maleficent star was after being shown various clips and films.

The pair have sent a video message in response thanking Jolie, saying: “If you ever come to London, feel free to buy a glass of fresh lemonade.”

The boys and their community have been working with One Nation, an organisation raising many Yemen, where it is estimated as many as 24 million people are in need of humanitarian aid to survive.