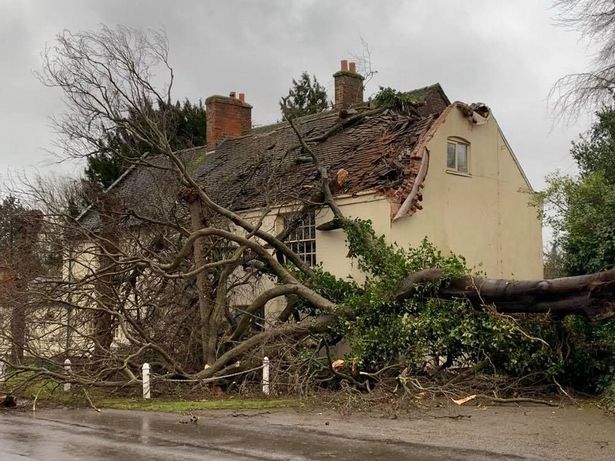 Storm Ciara has now claimed its third victim after as the country braces itself for ‘Storm Dennis’ which is on a collision course with the UK on Saturday, but not before more snow and ice chaos is expected this week. 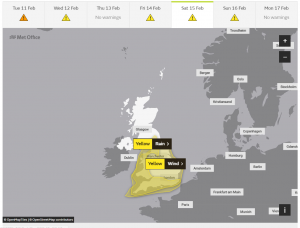 Heavy snow fell in some regions after the bad weather disrupted flights, ferries and trains throughout Britain yesterday, while gusts swept across the country felling trees and causing chaos on the roads.

Storm Ciara has moved eastwards from the UK, but it will leave mass white-outs in its wake up and down the country as the Met Office issued fresh snow warnings for today. 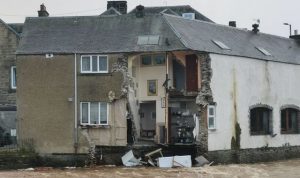 The Met Office has issued a warning over the next named storm, Storm Dennis, which a spokesman said is not expected to be as extreme as Storm Ciara but will bring widespread strong winds and heavy rain this weekend.

The effects of Storm Ciara, that hit the UK at the weekend leaving more than 20,000 homes without power overnight, was felt by commuters this morning who encountered further delays.

The powerful storm has also claimed three victims after a falling tree killed a 58-year-old Mercedes driver and a 77-year-old man fell over and banged his head on ice. And today, a dog walker was killed after being hit by a falling tree in Black Wood, Liverpool.

The forecaster has warned that treacherous icy conditions will sweep across the Midlands, parts of the northeast, Scotland and Northern Ireland.

A yellow warning for heavy snow and strong winds is in place for Northern Ireland and most of Scotland, while a yellow warning of snow and ice is in force for north-west England today.

There is also a yellow snow and ice warning covering these regions on Wednesday, as snow showers and icy stretches could cause further disruption. 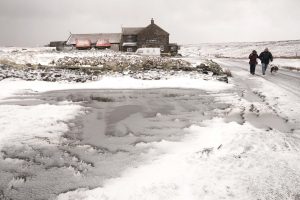 A yellow weather warning has been put in place for much of England and Wales on Saturday, with gusts of more than 50mph forecast and heavy rain bringing a further risk of flooding.

Steve Ramsdale, chief meteorologist at the Met Office, added: ‘Another spell of very wet and windy weather is expected for Saturday, although Storm Dennis is currently not expected to be as severe as Ciara disruption is still likely.

‘Our confidence in the forecast means we have been able to issue severe weather warnings well in advance, giving people time to prepare for potential impacts of the storm.’ 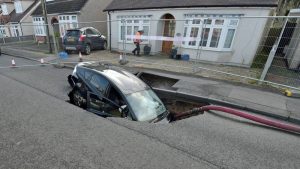 Storm Ciara has already claimed two victims after a falling tree killed a 58-year-old Mercedes driver and a 77-year-old man fell over and banged his head on ice.

Emergency services were scrambled to the scene in Clydebank, West Dumbartonshire at around 11am yesterday after the pensioner fell over in icy conditions but they were unable to save him.

The 58-year-old man died in the storm in Hampshire on Sunday. The victim was driving from Winchester to his home in Micheldever, when the tree came down on top of his Mercedes at around 4pm.

Wind speeds in the area reached 60mph at the time of the incident and the man was declared dead at the scene. 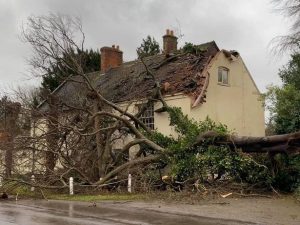