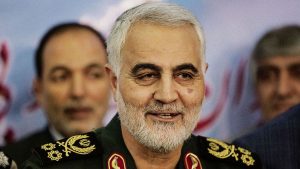 The UK government has “urged all parties to de-escalate” after the killing of Iranian General Qasem Soleimani in a US airstrike in Iraq.

He was killed on Friday in a strike ordered by US President Donald Trump.

Major General Qassem Soleimani, the architect of Iran’s intelligence and military operations abroad, was hailed as a hero at home and considered one of the most powerful figures in the country.

Foreign Secretary Dominic Raab said the UK “recognised the aggressive threat” Gen Soleimani posed, but “further conflict is in none of our interests”.

Jeremy Corbyn said the “US assassination” was an “extremely serious and dangerous escalation”.

The Labour leader said the UK “should urge restraint” from both Iran and the US and called for the government to “stand up to the belligerent actions and rhetoric coming from the United States”.

He added: “All countries in the region and beyond should seek to ratchet down the tensions to avoid deepening conflict, which can only bring further misery to the region, 17 years on from the disastrous invasion of Iraq.”

The killing of Gen Soleimani marks a major escalation in tensions between Washington and Tehran.

Iran’s Supreme Leader Ayatollah Ali Khamenei said “severe revenge awaits the criminals” behind the attack, but a statement from the Pentagon said Gen Soleimani “was actively developing plans to attack American diplomats and service members in Iraq and throughout the region”.

The Foreign and Commonwealth Office has warned all British nationals to avoid any rallies, marches, or processions in Iran over the three days of national mourning the country has called for Gen Soleimani.