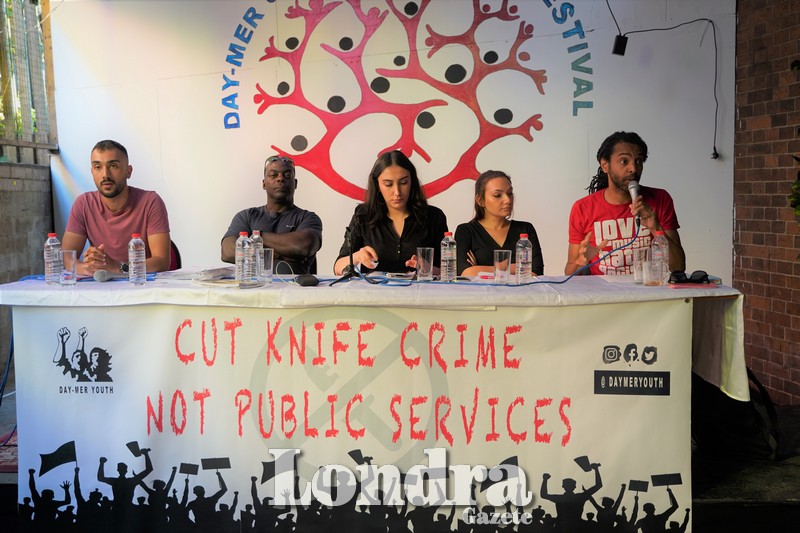 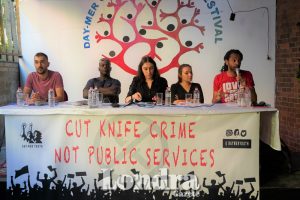 The panel, organised by members of the youth commission of the Turkish Kurdish Community Solidarity Center(Day-Mer), discussed the reasons behind the increasing knife attacks and the ways to solve them. The panel titled “Lives not knives’ took place on Wednesday (3 July)  evening at Day-Mer’s headquarters in Tottenham.

Speakers of the panel, moderated by Dilan Seçgin, Dean Ryan from the Youth for Justice Campaign, Enfield Councillor Ergin Erbil,  Zak Cochrane from Stand Up to Racism Campaign Ceren Sağır was a journalist from the Day-Mer Youth Commission.

After a short opening and greeting from Moderator Seçgin, journalist Sağır from Day-Mer Youth Commission, stating that knife attacks were a problem from the past to the present saying, “Why hasn’t anyone ever done anything to end this?”. Voicing that the media and the government ignored the attacks, said that there is a management system that does not care about young people and the problems. Stating that the biggest issue is the closure of the social services buildings and their employees, leaving them unemployed, she said that the existence of the Youth Committee within Day-Mer and a great chance for them. 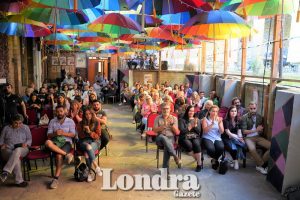 Ryan from the Youth for Justice Campaign began his speech by explaining that he waking up each morning, looking at the news, saying that he knew someone he knew had been stabbed. Ryan said the police discriminate against Africans and people of other nationalities, stopped and scanned almost everyone, especially young people in North London, but not in the areas where the rich British lived.

Cochrane from the Stand Up Against Racism Campaign noted that the rate of knife attacks in Enfield alone was twice that of London. Cochrane argued that the cause was the Conservative Party government cuts to every institution. He also gave America as an example, stating that young people futures were being taken away from them.

After the speeches, the panellists who answered the questions of the listeners in the panel went to the question-answer section and then listened to the participants’ suggestions against these problems.