Tanju Yusuf, 51 has claims he is entitled to the Pekalp of London family future of £10 million after father know as Joe- İsfendiyar Yusuf passed away in 2014.

He has also claimed that his brother-in-law Arif Ozerin, 50 beat him with a piece of wood from the factory floor, when a confrontation turned ugly just months before his father’s death.

The High Court case saw his elderly mother Sue Yusuf being wheeling in by his sister Askin Ozerin, Ms Ozerin an architect and mother are demanding half of the property assets which they have listed to be £10million

“You came at him and hit him several times… He was assaulted in plain sight of the entire staff,”

Mr Ozerin, disputed the claim he was a “violent man” and told the court he had grabbed the wood in defense after Mr Yusuf had repeatedly shouted at his wife.

“He was deliberately trying to wind me up… I tried to warn Tanju to stop abusing my wife in front of the workers,” he said.

“I just grabbed a piece of wood from behind me. I tried to hit him, but I didn’t get a clean shot.”

“He sacked me. He was a brother to me. I was shocked by what happened in 2014. I had to just walk out. I couldn’t even get my kids’ pictures from my office.

“We were partners, we were brothers, we were family. We had barbecues at mum’s house. We were going on holiday together.” 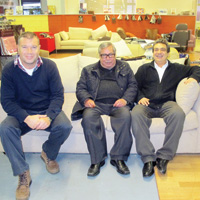 Timothy Evans, acting on behalf of Ms Ozerin and her mother, told the court that Joe Yusuf and his wife Sue came to east London as immigrants from Cyprus in the 1960s.

They went on to build up a multi-million pound property empire, Pekalp Properties Ltd, and furniture business, Pekalp of London Ltd.

After Joe died in July 2014, a hotel and casino complex and 10 villas in northern Cyprus were sold for £5million and the money was split among the family.

it was also noted that Joe and Sue’s divorce in 2012 had created rifts in the family.

He received his mother’s 25 % share in 2009, but his mother claims her signature on the documents was “forged”.

Ms Yusuf claims she helped to set up the business, which bears her maiden name Pekalp working as a seamstress in the factory in the early days of what is now a multi-million-pound enterprise.

With the support of her  daughter, she is fighting for the shares of 25% to be returned and for the court to wind up the property business and divide up the assets.

Mr Yusuf disputes this, claiming his mother signature is real and he is also claiming his is owed £1.8 million from the shares of property’s which were sold in Cyprus.