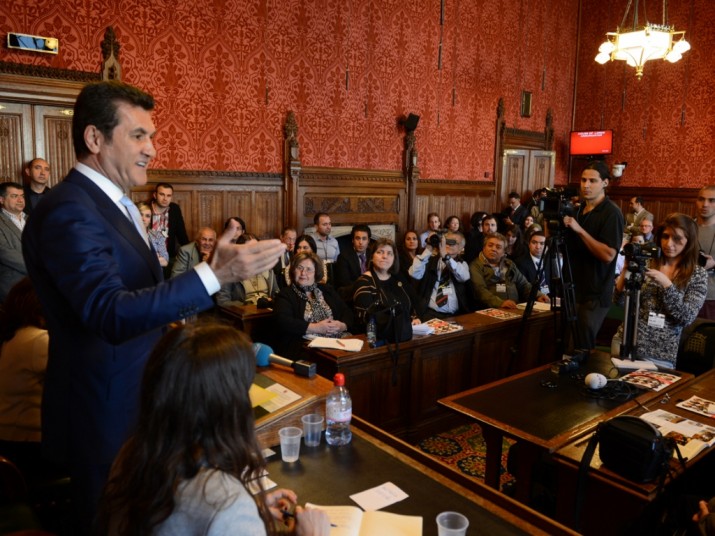 Mustafa Sarıgül in the House of Commons

The defeated candidate for Istanbul’s mayor has dismissed calls for a ‘consensus candidate’ to oppose Recep Tayyip Erdoğan in this summer’s presidential election.

Mustafa Sarıgül, who lost the race for the mayoralty to the governing party candidate, Kadir Topbaş, said unity candidates would naturally emerge in the second round of voting and that each political party should field their own contenders for the first round.

“A consensus candidate in our country would be stuck in the middle,” he said at an event organised by the Centre for Turkey Studies think-tank.

Mr Sarıgül has been named by some analysts as a possible presidential candidate. He gained national recognition 10 years ago after an unsuccessful attempt to topple the then leader of the main opposition Republican People’s Party (CHP). His mayoral candidacy in Istanbul was always seen as a springboard for furthering his career on the national stage.

He told the audience at the House of Commons: “Every political party should name their own candidate. That candidate should describe their own views, thoughts, plans and objectives for Turkey as president.

“If that candidate reaches the second round, this concept of a ‘consensus candidate’ will comfortably emerge.”

The election rules, which will see a Turkish president elected by the people for the first time, dictate that a second round of voting between the top two candidates must be held if no candidate wins 50 per cent of the vote.

Earlier in the day Mr Sarıgül attended a reception for the state opening of parliament, hosted by speaker John Bercow.