DURING the conference in London attended by the Vatan Party Chairman Doğu Perinçek, argued that Turkey has entered a revolutionary period. 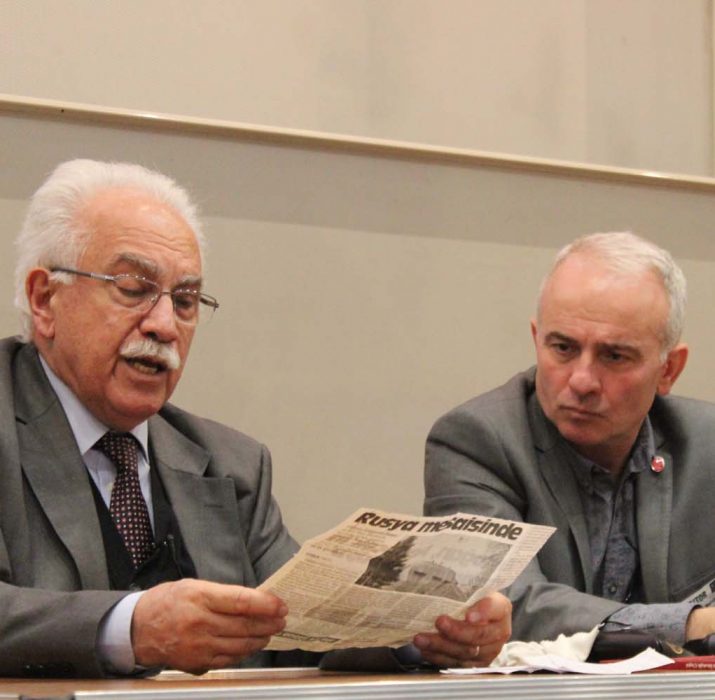 DURING the conference in London attended by the Vatan Party Chairman Doğu Perinçek, argued that Turkey has entered a revolutionary period.

The conference was organised by the Anatolia Cultural Centre in London, within the name of “Recent developments in Turkey, Middle East, and Cyprus”. At the conference in London, the Vatan Party chairman and presidential candidate Doğu Perinçek participated as the main speaker.

The event was held 4 March Sunday at King’s College London, whereby Doğu Perinçek discussed his assessment of the latest developments in Turkey, Middle East, and Cyprus.

Perinçek claims Turkey is one of the vital actors whilst we are entering a new world period.

He continued his speech by stating:

“A new world order is being established and one of the important factors of this changing period are weapons. Along with Turkey, Syria, Iraq, Iran, and Russia are the countries contributing to a new world order with weapons. These developments are very important, and there are alliances that will determine the future of the world among these countries.”

TURKEY IS LEAVING FROM THE ATLANTIC SYSTEM

“Turkey is leaving from the Atlantic system and instead of entering a Eurasian system. This process is not only on the international level, it is also a process in which the power and class relations in the interior will change. More precisely: internal dynamics and determine Turkey’s place in the world and the system. The people of Turkey, because he wants the homeland integrity and production economies, Turkey is severed from the Atlantic system, and are turning to Eurasia.”

WE HAVE ENTERED AN REVOLUTIONARY PERIOD

Eurasia is the climate of the process of completing the Kemalist Revolution. Homeland integrity, clean-up of terrorism, production economy, secularism, and enlightenment can all be passed on in the Eurasian relations. Russia, China, India, Iran and Syria, they explain that they want the Kemalist government in Turkey. This process of cooperation with countries, in terms of Turkey inevitably means a favourable environment for the complete agenda Kemalist revolution.

In this process, the internal dynamics and determine Turkey’s place in the world and the system. The people of Turkey, because he wants the homeland integrity and production economies, Turkey is severed from the Atlantic system, and are turning to Eurasia.”

After completing his speech, Perinçek answered the questions from participants.