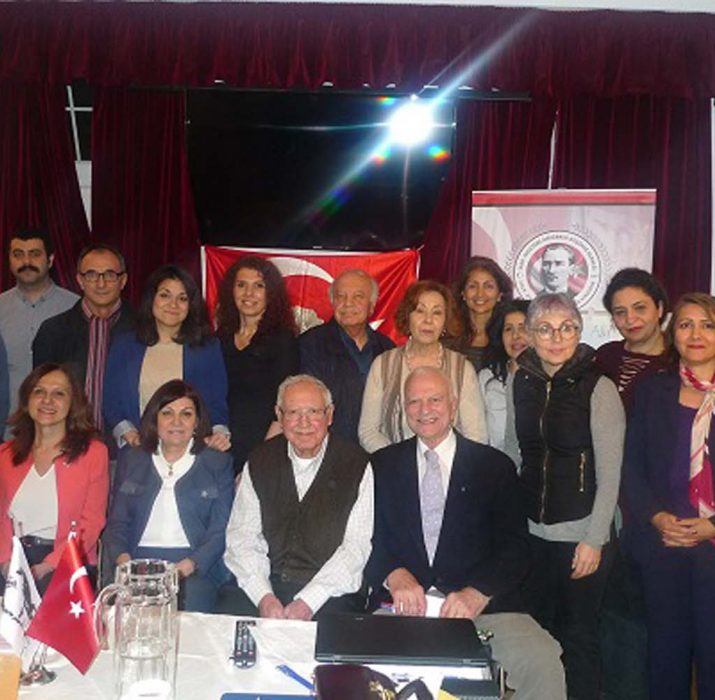 President Jale Özer, made the opening speech, stressed the importance of the 2019 elections and emphasized the need for active support of everyone who embraced Atatürk’s principles and reforms. She stated that in the new period, efforts should be made to develop new, inclusive and youth oriented strategies in order to keep the Kemalist alive. Added, “Only from the dark situation in our country is the road map drawn by Atatürk and then we will go out by telling them on every platform. “Afterwards, Gönül Cilasun, Kadriye Atabay, Yildiz Kalkan, Erol Başarık and Ahmet Sapaz, who have worked with the board of directors until today, are thankful for their successful work.

At the end of the opening speech of Jale Özer, invited a moment of silence to the memorial stance of the martyrs of democracy and of all the martyrs who defended their lives for the defence of the homeland. In this general meeting, Turan Erdemgil was elected as chairman of the council and Timur Doğruyol as vice chairman, and Ahmet Sapaz and Eray Arda Akartuna were elected as members.

After the unanimous approval of the Activity and Financial Report, President Turan Erdemgil read the congratulatory messages communicated to the UK ADD by the General Assembly. The announcement was accompanied by a presentation showing 249 views over the 40-minute extensive activity report. Attention was drawn to the high number of congratulatory messages communicated to Divan.

In the UK ADD management, President Jale Özer and Treasurer Yildiz Kalkan, while continuing their relativisation, cautioned young people among the first-time managers. IADD’s new board of directors has the following names: Jale Özer, Ph.D. Ali Tekin Atalar, Yıldız Kalkan, Müslüm Alataş, Şebnem Uluçay, Çiğdem Yılmaz and Ayşe Yumurtacı. Then members of Honour and Supervisory Board were elected. In the wishes and suggestions section, the participation of the members interacting great satisfaction. Many projects have been proposed.