KKTC President Mustafa Akıncı, was in London on a visit were he met with the Turkish Cypriot community in England, talking in the House of Parliament and at an event held in North London. 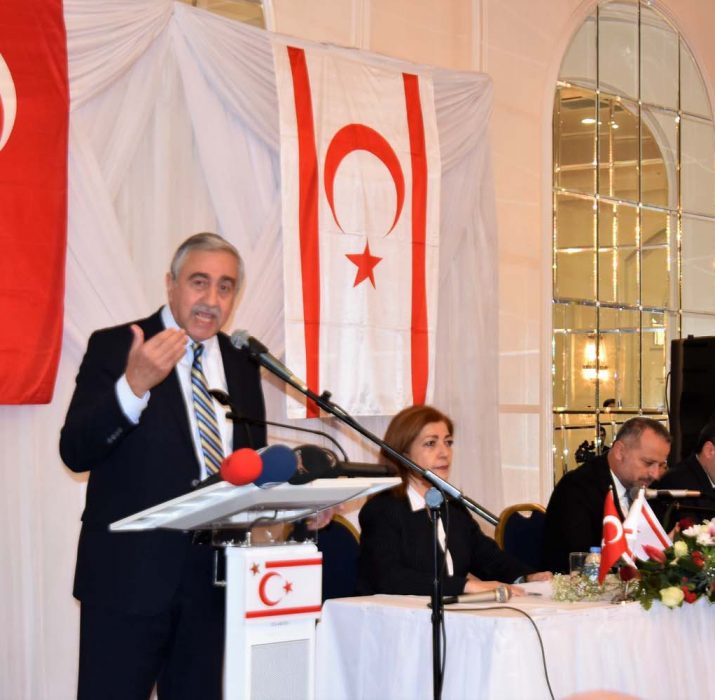 KKTC President Mustafa Akıncı, was in London on a visit were he met with the Turkish Cypriot community in England, talking in the House of Parliament and at an event held  in North London.

President Mustafa Akıncı first spoke last week at a meeting organized by the KKTC Friendship Group in the House of Parliament on Wednesday evening.

Speaking at a special meeting hosted by Lord Sharkey, Akıncı answered participants’ questions by explaining the reasons for the failure of the Cyprus Conference.

On Thursday evening, President Akıncı met with representatives of non-governmental organizations operating in the UK and with memebers from the Turkish Cypriots coummunity to discuss the progress and current developments in Cyprus’s negotiation. The meeting held in WoodGreen, North London, where a large communtiy of Turkish Cypriots from Cyprus live, Akıncı spoke and gave information about negotiations for settlement in the island.

Pointing out that he started the negotiation process two weeks after his presidency came to office, Akıncı said that important distances were received especially during the first year. Akıncı stated that he is sincere in the goal of solution and that he has not given up yet. He said that he did not open debate by accepting the compromised issues before him. Akıncı said that the meeting was held at the level of more than 70 leaders in the negotiation process and more than 150 meetings were held at the level of the negotiating team. He said “Our forces have entered into a process to deal with issues of land, security and guarantees and the 5th conference has been convened for the first time in history”.

“The aim is to break ties with Turkey “

Pointing out that the main objective of the Greek Cypriot side is to cut all ties with Turkey in the TRNC, Akıncı said “imagine that Turkey can withdraw everything from Cyprus by all means.That was not realistic, but it is possible to keep Turkey’s relations with Cyprus at a reasonable level. The Turkish Cypriot side was also reasonable and realistic in Turkey, but the ‘zero military, zero guarantee discourse’ did not give us a maximalist rhetoric, a compromise opportunity. ” he said.

Greeks need to change their thoughts

Akıncı said that everyone wondered what would happen in the future and said, “There is a need for a very serious mentality transformation on the Greek side.”

“They have difficulty sharing authority with us. I can very much objectively evaluate the following. In the past years, the status quo has become bone. These are facts. This ossified status quo has two faces. On one side, since 1963, there has been a Greek Cypriot who has hijacked the state, an officially recognized state, and became the sole owner of the Republic of Cyprus. There are very serious problems in sharing it with us and transforming it into a federal structure. They could not do that. ”

Pointing out that any negotiations to be done for the solution should be result-oriented, time-limited, packaged, Akıncı said that they do not want inefficient negotiations that will last for years.

“Everyone will win from the solution, from peace, everyone will lose from the tension,” Akıncı recalled that Turkey would be the shortest and cheapest way to transport natural gas reserves in the Eastern Mediterranean to Europe.

Pointing out that KKTC will become part of international law in peace and solution environment, Akıncı said, “All of this is not only ours but that it can be done with the contributions of others, our good intentions and their contribution. We have no intention to give up, and I will tell him very clearly. ” she said.

We wont give up on equality and security

Akıncı stated that the KKTC has three things that it can not give up in any solution: “One is our freedom, we can not go under dominance, the second is our political equality, our third is our security”, and Akıncı emphasized that these three principles will also apply to the Greeks. Akıncı then went on to answered the questions from the those came to listen to him after his speech. At the reception, Cypriot delicacies were served for the participants, while Akıncı had the opportunity to meet with the members of the public one by one.