Turkish Prime Minister Binali Yıldırım and his British counterpart Theresa May expressed their consensus to continue their cooperation in many areas during their bilateral meeting on Nov. 27 at Downing Street in London 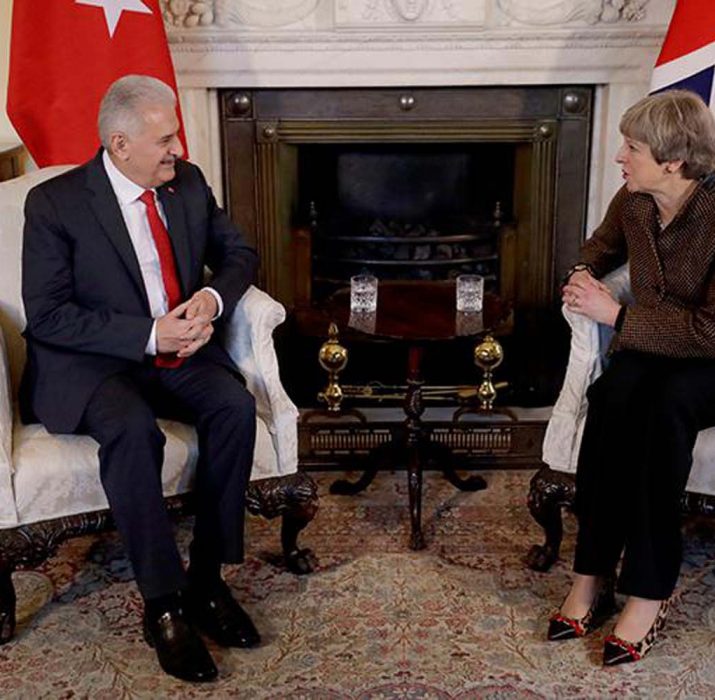 Turkish Prime Minister Binali Yıldırım and his British counterpart Theresa May expressed their consensus to continue their cooperation in many areas during their bilateral meeting on Nov. 27 at Downing Street in London, such as the fight against terrorism and regional issues.

A statement released by the press office of the Turkish Prime Ministry following the two leaders’ meeting said Yıldırım and May had spoken of their common will to take cooperation between Turkey and the United Kingdom a step further in many areas, including the economy, trade and defense industries.

The one-to-one meeting between Yıldırım and May then was reported to have been followed by another meeting at the delegation level, to which Turkey’s EU Minister Ömer Çelik, Interior Minister Süleyman Soylu, Economy Minister Nihat Zeybekci, National Defense Minister Nurettin Canikli, Turkey’s London Ambassador Abdurrahman Bilgiç and key advisor to prime ministerial foreign policies Kerim Uras on the Turkish side.

Prior to the meeting, Yıldırım and May held a brief press conference, during which Yıldırım said they would discuss “regional issues, including Iraq and Syria, with the fight against terror being priority” during the meeting.

“This visit will be an opportunity to strengthen relations [between Turkey and the U.K.],” he said, adding that May’s visit to Turkey at the beginning of 2017 had opened new opportunities for both countries in terms of new cooperation and investments, especially in the defense industry.

“Relations with Turkey are very important to us. We have been dealing with various global issues jointly. We are struggling together on terror. Additionally, we have a trade volume reaching up to 15 billion pounds [$20 billion]. I am happy to see this progress in our relations since my visit to Turkey,” May told reporters during the press meeting.

Yıldırım, who is in the British capital upon an invitation from May, was later expected to meet British Foreign Secretary Boris Johnson and Home Secretary Amber Rudd in the afternoon.

The meeting with May follows Yıldırım’s meeting on the morning of Nov. 27 with a group of British businesspeople, focusing on new investment opportunities.

Yıldırım said the purpose of the visit was to see “how we can carry Turkey-U.K. relations further.”

“Turkey is located in a very dynamic geography” and any investment there would also mean investing in a region with around 1.5 billion people, he added.

Yıldırım and his team were later scheduled to be hosted at a dinner organized later by Lord Janvrin, the British prime minister’s trade envoy to Turkey.

CEOs from prominent British firms such as BP, Shell, Lloyds, Vodafone, HSBC, Rolls Royce and GlaxoSmithKline were also expected to attend to the dinner.

Yıldırım’s visit was scheduled to end on the evening of Nov. 27. (HÜRRİYETDAILYNEWS)