Police are investigating a chilling video in which a man brandishing a machete threatens to blow up mosques and kill Muslims. 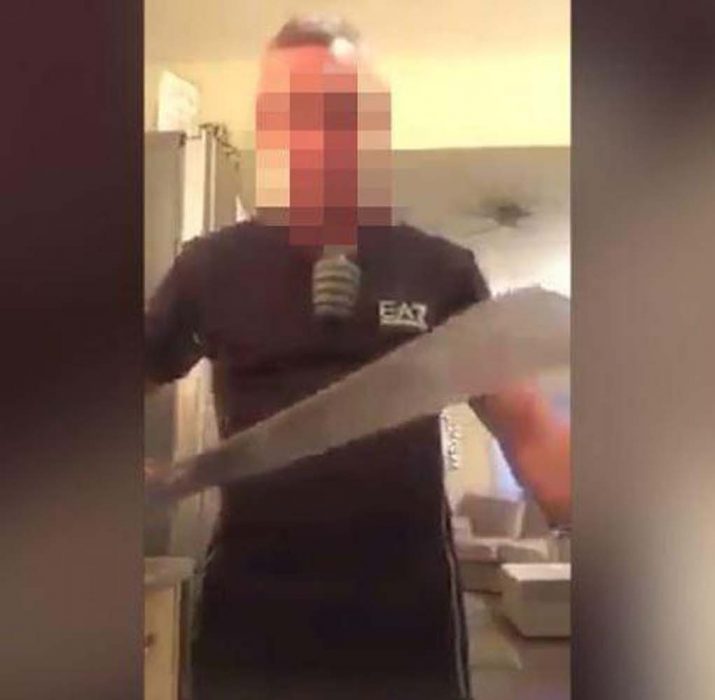 Police are investigating a chilling video in which a man brandishing a machete threatens to blow up mosques and kill Muslims.

In a disturbing racist rant, the man peers into the camera while strapped with what appears to be a grenade and warns he wants to behead followers of Islam.

Merseyside Police confirmed detectives were trying to “establish the origins of the video”, widely shared on social media in the aftermath of the London Bridge and Manchester Arena terror attacks.   The clip – which appears to have been filmed in the kitchen of a house  – begins with the man saying: “This is a quick message for Muslims.”

Referencing the suicide bombing that killed 22 people at Ariana Grande’s concert last month, he says: “If you want to see terrorism, come and see me you cowards.”

Withdrawing a huge blade from its sheath, he adds: “Let me tell you, I will get people to run in your mosques with pineapples [grenades] and blow your mosques off this f***ing planet.”

The clip has been shared by thousands of people on Facebook and Twitter, with anti-racism groups urging anyone who recognises the man – who has a Liverpudlian accent – to report him to police. A police spokesman said: “Merseyside Police can confirm that a video posted on social media has been brought to the attention of the force [on] Sunday 4 June.

“Officers have launched an investigation and at this time enquiries are ongoing to establish the origins of the video.

“The force takes all reports of hate crime seriously and incidents are investigated by specially trained detectives.”

Tell MAMA, an organisation that monitors Islamophobic hate crimes, said Facebook was believed to have removed the original video after it was flagged up by concerned social media users. Greater Manchester Police said last week that reports of hate crimes doubled in the city in the days following the arena attack.