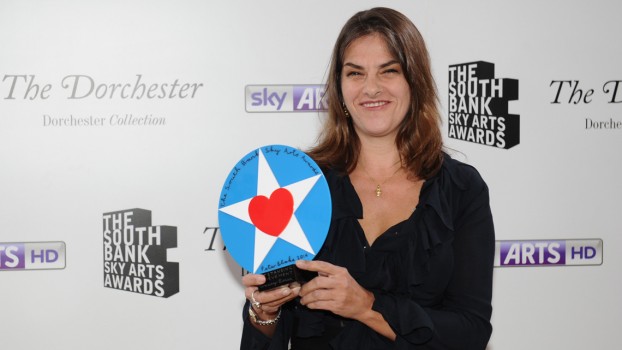 She received the award at a ceremony from comedian and TV presenter Frank Skinner. The ceremony at London’s Dorchester Hotel last weekend was hosted by Melvin Bragg, who also hosts Sky Arts’s South Bank Show.

“It’s not about me, it’s about art, it’s about culture,” she was quoted by the BBC as saying after receiving her achievement award.

“I’m totally focused on what I’m doing at the moment and am very happy,” said the artist, who has recently bought a home in Miami.

Emin said her new objectives are to pass her US driving test and learn how to speak French, but joked the second ambition was “never going to happen”.

Tracey Emin was born in Croydon to a Turkish father and English mother, and raised in Margate.

Emin’s father was married to a woman other than her mother and divided his time between his two families. He owned the Hotel International in Margate, and, when the business failed, Emin’s family suffered a severe decline in their standard of living.

She rocketed to fame after her work “Everyone I Have Ever Slept With 1963–1995”, a tent with names sewn on the inside, was shown at Charles Saatchi’s Sensation exhibition held at the Royal Academy in London.

After the network had announced that The South Bank Show would be cancelled at the end of the 2009 season, the award ceremony continued to be broadcast by Sky Arts and was eventually renamed the South Bank Sky Arts Award.

Sky Arts revived The South Bank Show itself in 2012. The ceremony will be broadcast on Sky Arts on 30 January.