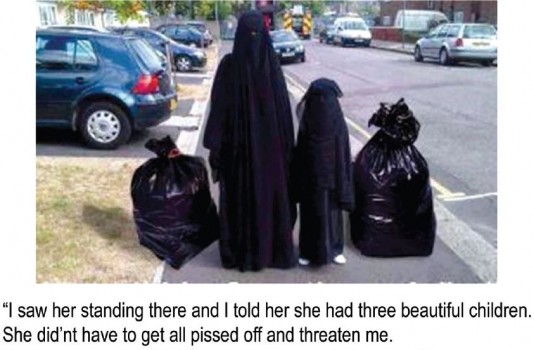 AN ENFIELD councillor who notoriously compared black rubbish bags to burqa-wearing children has been selected as a Conservative candidate in this May’s local election.

Chris Joannides was suspended from his party in February last year after he posted a photograph of a woman and child dressed in burqas, with a black binbag on either side of them, on his Facebook page.

The comment underneath read: “I saw her standing there and I told her she had three beautiful children. She didn’t have to get all pissed off and threaten me. It was an honest mistake!”

Enfield is home to a mix of Greek and Turkish residents and a number of Cllr Joannides’s constituents described the comments as offensive to Muslims.

Insiders at the Enfield Conservative Party have told Londra Gazete the party whip has recently restored to Cllr Joannides and that he has been selected as a candidate for re-election.

But the Grange Ward councillor now faces an investigation into his online activity at a meeting of the council’s Conduct Committee next month.

Cllr Joannides was told in November last year that he had not broken any laws and would not face criminal charges.

The decision came after an investigation by police and the Crown Prosecution Service that lasted several months.

A spokesman for the Crown Prosecution Service said: “This matter was referred to the CPS for charging advice at the end of October 2013. Police were subsequently asked to supply some additional material.

“A decision to take no further action was made at the end of November and communicated to police.”

The party has not announced its Enfield Council candidates for the local election on 22 May, but Mr Joannides’s Grange ward selection is understood to be assured.

Cllr Joannides’s online activity will now be investigated by Enfield Council. The case, which was put on hold during the police investigation, will be taken up by the Councillor Conduct Committee.

Yasemin Brett, the Labour councillor who chairs the committee, said she expected a date to be set for early February.

“This is a non-party political committee made up of two Labour and two Conservative members, as well as an independent observer” she told Londra Gazete.

The burqa photograph was one of a number of controversial posts made by the councillor on Facebook, which included one message sent to friends during meetings with local residents where he complained about having to spend time with constituents instead of watching football on the TV.

The councillor for Grange ward in Enfield was accused at the time of being Islamophobic, a charge he firmly denied.