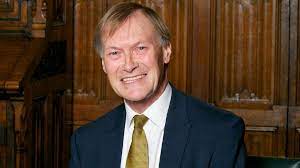 ‘Lone wolf’ attacker Ali Harbi Ali, 26, has been found guilty of murdering Sir David Amess and preparing acts of terrorism after a jury took just 18 minutes to make their decision.

Conservative MP Sir David, 69, was brutally stabbed more than 20 times with a foot-long carving knife as he held a constituency surgery in Essex.

His devastated family said their hearts had been ‘shattered’ by his ‘cruel and violent death’ at Belfairs Methodist Church in Leigh-on-Sea.

The British politician’s loved ones sat just metres from his killer as he was convicted at the Old Bailey on Monday.

Ali, who is due to be sentenced on Wednesday, refused to stand up in the dock on ‘religious grounds’.

Judge Mr Justice Sweeney had assured jurors they were ‘under no pressure of time’ as he sent them out to consider verdicts at 12.22pm on Monday.

Thanking each member for their service today, the judge told them: ‘It cannot have been easy to listen to the evidence you have listened to.’

Islamic State fanatic Ali had told Sir David he was ‘sorry’ before plunging the knife into him, leaving the father-of-five screaming. 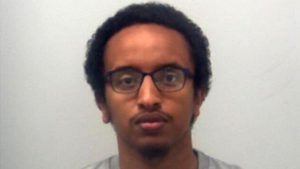 He admitted to killing the veteran Tory after tricking his office into believing he was a healthcare worker moving to the area.

But he denied murder and preparing acts of terrorism following the tragedy on October 15 last year.

He told the court he had no regrets as Sir David’s death meant he could no longer ‘harm Muslims’ – referencing the MP’s voting record on the UK’s foreign policy, including airstrikes on Syria.

Michael Gove, Dominic Raab and Sir Keir Starmer were all assessed as potential targets as the Londoner spent years hatching the plot, the court previously heard.

‘If I thought I did anything wrong, I wouldn’t have done it’, Ali told the court.

He continued: ‘I decided to do it because I felt that if I could kill someone who made decisions to kill Muslims, it could prevent further harm to those Muslims.’

‘He voted previously in Parliament, not just him… I decided if I couldn’t make hijrah, if I couldn’t help the Muslims (in Syria), I would do something here.’

When he was asked what difference killing Sir David would make, he replied: ‘For one, he can’t vote again.

‘If he had previous for doing votes like that he won’t do it in the future, and perhaps send a message to his colleagues.’

The court heard how Ali, who came from an influential Somali family, had become self-radicalised in 2014.

The terrorist sent a manifesto on WhatsApp to family and friends seeking to justify his actions around the time of the attack.

Sir David’s assistant Julie Cushion told jurors he appeared ‘self-satisfied’ in the wake of the brutal killing, while he was filmed speaking calmly in a police interview.