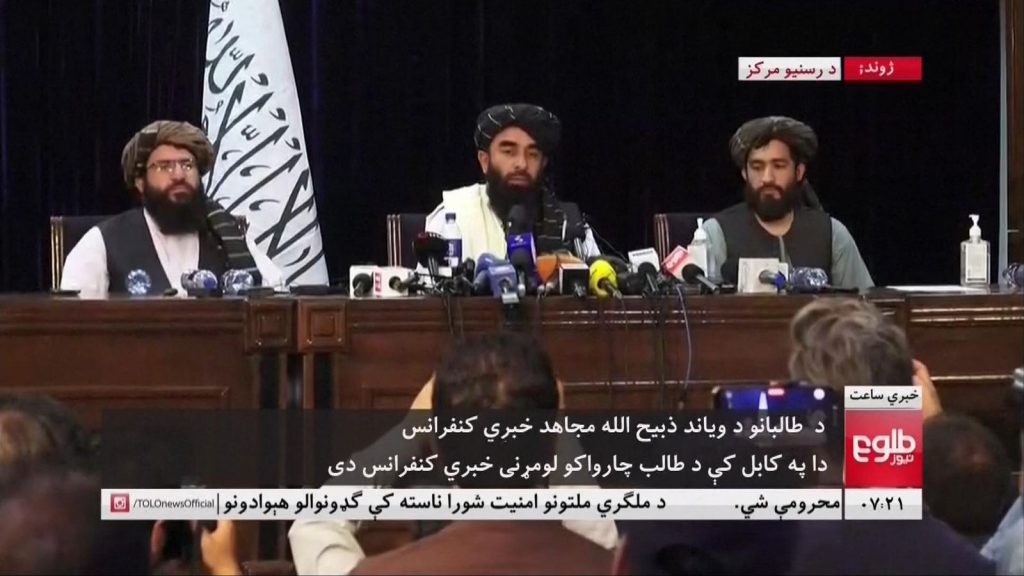 The Taliban are holding their first press conference after taking over in Kabul.

Their spokesperson said: “We don’t want any external or internal enemies.”

It comes after Afghanistan vice president Amrullah Saleh has said that he is in Afghanistan and is the “legitimate caretaker president”.

Taking to Twitter, Mr Saleh wrote: “According to the explicit provision of the Constitution of the Islamic Republic of Afghanistan, in case of absence, escape or death of the President, the First Vice President will be the acting President.

Taliban spokesman Zabihullah Mujahid claimed the group had planned to stop at the gates to Kabul but said that because the previous administration was “so incompetent”, they had moved into the city to “ensure security”.

He said the security of foreign embassies was of “crucial importance” and that residents of Kabul should “be assured that your security is guaranteed”.

Mr Mujahid said the Taliban should be “treated accordingly” by the international community.

“We do not want to have any problem with the international community,” he said.

“We have the right to act on the basis of our religious principles and rules and regulations, this is the right of Afghans.”

When questioned about women rights Mujahid says: “We are going to allow women to work and study within our frameworks.

“Women are going to be very active within our society, within our framework.”

In an interview with Sky News, Suhail Shaheen a mother spokesperson for the Taliban said “thousands” of schools continue to operate following the Taliban takeover.

With women being able to stay in education up to university level.

Asked if the Taliban promises to respect the freedoms of women, Shaheen said: “Of course… we are committed to women’s rights, to education, to work and to freedom of speech, in the light of our Islamic rules.

He said “all people should be equal… and there should not be discrimination in society”.

Women will be expected to wear the hijab but not the burka, he said.

“These are not our rules, these are Islamic rules”, he added, saying it is “for their security”.

When asked if women could hold political positions, he said: “Our policy is clear – they can have access to education and work, that is one thing.

“They (women) can hold positions, but that position they can hold is in the light of Islamic rule – so there is a general framework for them.”